I found the following statistics from Michael Specter’s recent article, “Freedom from Fries,” in The Atlantic thought provoking:

Fast food has become a synonym for bad food. Yet, the industrial farm system that has made it possible for McDonald’s and many other chains to sell cheeseburgers for a dollar has also enabled Americans to spend a smaller percentage of their income on food than people do in any other country. At the start of the First World War, food purchases consumed half the average paycheck; today the figure is six per cent. According to federal statistics, an American in 1919 had to work for two and a half hours to earn enough money to buy a chicken; these days it would take less than fifteen minutes of labor.

The cheap prices for unhealthy, processed & fast food are tied closely to US agricultural subsidies. This is another reason (among many) we need to elect Larry Lessig as our U.S. President in 2016 and support his agenda of campaign finance reform. As US federal campaign finance currently works, the power of the corporate food lobby to maintain these unhealthy (and arguably deadly) food subsidies is politically untouchable. It sounds positive that US citizens don’t have to work as long or spend as much of our paychecks on food as we did a century ago. It’s lamentable that healthy food is so hard to find in many low income neighborhoods, however, and that nationally we are economically discouraged from making healthy food choices.

Two summers ago I listened to and subjected members of our family riding in our minivan (via Audible) to the excellent book, “Salt Sugar Fat” by Michael Moss. I was somewhat aware of the transformations which have happened on our farms and in both grocery stores as well as restaurants since World War II, but Moss’ book dramatically highlighted them in starker ways than I’d previously heard, seen or read. Specter addresses the effects of industrial scale farming and food production in his article too, noting:

We wouldn’t be able to eat fifty billion hamburgers a year, and at least as many orders of French fries, unless thousands of the farms that provided the meat and potatoes were also factories.

He also highlights the potentially addictive nature of processed foods.

Because our brains evolved at a time when food was scarce, we are biologically predisposed to consume a diet that is high in calories, sugar, and fat. And that is exactly what Happy Meals, and most processed food sold in American supermarkets, offer. When you eat a Big Mac, your blood sugar soars. Your brain then releases a flood of chemicals, such as dopamine, that induce pleasure and contribute to a tendency to eat compulsively. At high enough levels, the salt and sugar in food can be addictive; you crave them like a drug.

The announcement this week by the World Health Organization that processed meats (like hot dogs and bacon) are cancer causing (carcinogens) on a par with tobacco was a surprise to me. I’ve known the meat processing procedures followed by meat packing plants are atrociously gross (thanks to my mom sharing takeaways from “Fast Food Nation” by Eric Schlosser a few years ago) but that hasn’t stopped me from buying an occasional package of Ball Park franks we eat at home mixed with Kraft Macaroni and Cheese. I’m rethinking that food choice now, even though it’s a fast meal option most members of our family seem to enjoy. 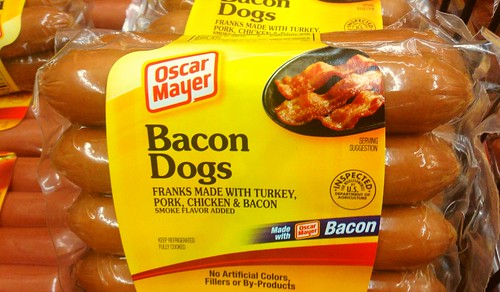 This quotation from Specter’s article, citing researcher Marion Nestle, highlights the aforementioned challenge we face today in our country with food choices, shaped by corporate competition as well as human evolutionary biology:

“The single most important problem with food in this country is that it is vastly overproduced, and the single most important nutritional problem is obesity,” Nestle said. “These issues are clearly related, and cheap food is a factor in both. Food companies compete fiercely for our food dollars and do everything they can to induce us to eat their products and to eat more food, regardless of the effects on waistlines and health.”

When our family drives almost any direction from our home in Oklahoma City, we are likely to see feedlots. When we lived in Lubbock, Texas, and the wind would blow from the southwest, everyone in town would smell the nearby feedlots. “The smell of money,” some folks liked to joke. Thankfully the wind didn’t blow from that direction very often. 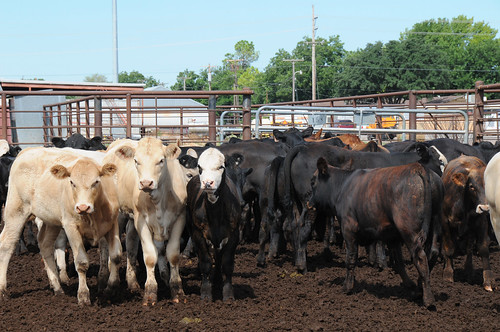 Cows are not naturally supposed to eat corn. Because of our agricultural subsidies and voracious national appetite for cheap beef, however, corn fed cows in massive feedlots abound in the midwestern USA. I don’t know if I’ve ever eaten a steak from a grass fed cow. A high school friend of mine, Lynn Seyler, studied in Argentina on a Fulbright Scholarship after college and came back raving about the taste and amazing quality of their steaks. Several years ago my parents in Kansas started buying their beef from local farmers and splitting the cost of buying butchered whole cows with friends. Financially this isn’t something our family has seriously considered. It’s also been something we don’t have the home freezer space to do. We need to make more efforts to buy and eat local produce, however. I’m sure there are places not too far away from our house where we could buy grass fed beef. I’m generally a lazy (as well as price conscious) grocery shopper, so I do most of our weekly grocery shopping at our nearby Walmart Neighborhood Market. Articles like this one by Specter make me feel less certain about my judgement in patronizing Wally World for our family food needs, however.

In his article, Specter discusses why it’s so hard for large scale restaurant franchises (or individual meat consumers) to buy grass fed beef:

Lyfe Kitchen offers a grass-fed steak for twenty dollars; raising cattle on grass can take a year longer than raising livestock the conventional way, which makes the animals much more expensive to feed. McDonald’s buys seven hundred million pounds of beef a year. No small group, no matter how popular, can compete with their prices, particularly if it stresses the quality of its ingredients. For places like Lyfe Kitchen and Sweetgreen, it’s never easy to guarantee fresh produce, sell only humanely raised meat, and offer a wide variety of dishes, none of which exceed six or eight hundred calories. To offer those choices on a national scale will require an agricultural system that rewards regional farming networks.

US agricultural subsidies are the key villain that drives much of our unhealthy food choices. Specter notes:

Today, though, taxpayers heavily subsidize corn and soybeans, two crops that feed livestock and help create the processed food that public health officials have warned us for years to stop eating. Few federal incentives exist for farmers to grow a more varied selection of vegetables or to motivate consumers to eat them. And at least half of our calories come from food that is subsidized by the government, a figure that has held steady for years.

The use of antibiotics to raise animals in our industrial farm system is also a big problem. A good family friend who works for Tyson and makes his living inspecting their chickens at a factory cautioned my mom years ago to NEVER buy or eat their chicken. I’ve heard this warning, but what brand of chicken do you think I bought at Walmart last week and cooked for our family this weekend? That’s right, it was Tyson chicken. 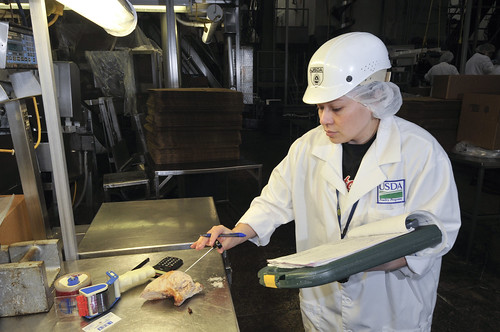 I was pleasantly surprised to learn in Specter’s article, therefore, that Tyson is going to stop using human antibiotics by 2017 in its farming production facilities. He notes:

This news is both welcome and scary. If Tyson Foods and McDonalds are going to stop serving chicken raised with human antibiotics, clearly the use of human antibiotics in food production is a bad thing. As a somewhat informed consumer, I’ve been aware of that position for many years, yet I did not alter my own food purchasing behavior as a result. Even though I’ve been armed with the knowledge that healthier chicken alternatives are available, I’ve gone with the option of cheap and readily available chicken instead. I’m sure there are lots (read “millions”) of other consumers and shoppers like me.

Specter’s article and discussion also resonated with me because of how cheap food at McDonalds is often the main choice of poor families in financial hard times. My wife teaches at an urban private school exclusively serving homeless children and their families. When many of these families have money to use for food, can you guess what they buy? My wife often comes home from school with stories about this. Specter confirms this reality, noting:

In the United States today, you can sell meals for a dollar or you can sell nutritious meals. Doing both on a large scale is not possible. Besides, millions of Americans rely on the kind of cheap food they get at chain restaurants. It may not meet a nutritional ideal, but they often have no choice. 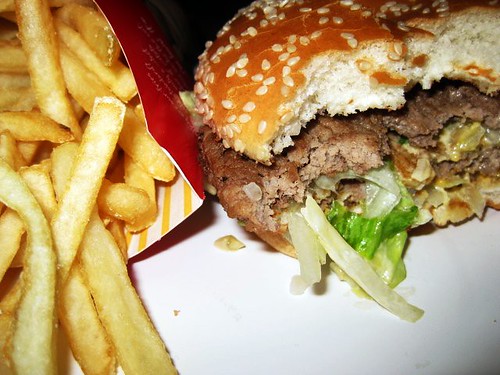 Specter gave me a new book to add to my Amazon wish list in his article: “Mindless Eating” by Brian Wansink. I fear it may read like a culinary auto-biography, but I’m going to be brave and hopefully read (or listen via Audible) to it soon.

As a teacher, educator and parent, I was especially interested to learn about “Sweetgreen” and their educational campaign to broadly change food values in the United States. Specter notes:

Sweetgreen, which was started in 2007 by three Georgetown graduates, aims to be a movement, selling a set of values in addition to its food. There are currently thirty-three Sweetgreen restaurants, and there are plans for many more. In nearly every city where the company has restaurants, it sponsors a program to educate fourth- and fifth-grade students about the basics of nutrition and the value of relying on seasonal produce. So far, Sweetgreen in Schools has reached four thousand students, most of whom come from lower-income families.

I highly recommend you read Michael Specter’s full article, “Freedom from Fries.” I can’t guarantee it will immediately change your food buying habits or mine, but it definitely can give us both much needed food for thought. 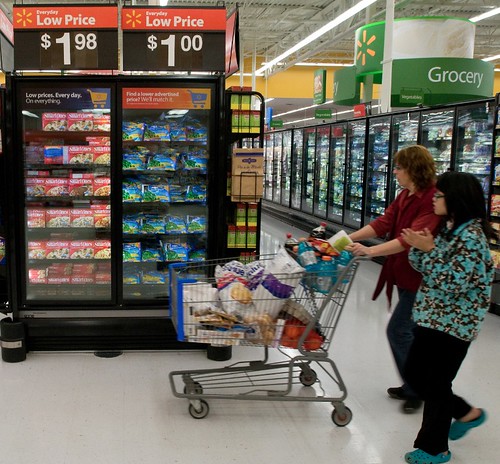 Mobile blogged on an iPad on a 3 hour Southwest Airlines flight to an east coast college visit with my son. Hat to to Pocket for providing offline article access to these thought provoking ideas from Michael Specter. Links and images added on a Macbook Air laptop. Cross-posted to Medium.