Transfer Video from an Android Phone to an iPad

UPDATE 12 July 2014: Thanks to Kiwi teacher Allanah King (@Allanahk) for sharing the FREE iOS and Android app “Flick” (@get_flick) which supports cross-platform sharing of photos & videos between devices. Transferring to DropBox is another solution suggested by several others which would have been (most likely) faster than the multi-step workaround described in this post.

This week at iPad Media Camp in Manhattan, Kansas, one of our participants had a video on her Android phone which she wanted to use in a video she was creating in iMovie for iPad. When we plugged her Android phone into my Macbook Air laptop using a USB cable, nothing happened. Even when I opened the iPhoto and Image Capture programs on the laptop, the Android phone didn’t appear as an available camera so we could import the video. Someone at the workshop thought we needed to click a setting so it would share photos and videos via USB, but we didn’t know what that setting was or how to activate it. (I’m very Android-device illiterate at this point.)

I remembered back to April of 2013, when I worked with a 7th grade teacher at Yukon Middle School (Phillip Ward) to create and help facilitate a BYOD Paper-Slide Video project for his students. Most students used iPhones to record their paper slide videos, but one used an Android phone. At that time, we had the student install the free app Air Droid on his Android phone so we could connect to it from Philip’s laptop via wifi and transfer his finished video for uploading to YouTube. You can more about this project in my post, “Paper Slide Video: Your Next (or First) BYOD Technology Integration Project.”

Yesterday in day 2 of iPad Media Camp, we focused on “Quick Edit Videos” using the free YouTube Capture app, iMovie for iPad, and the new YouTube “Creator Studio.” Today, Google released (or Apple at last approved on the app store) the free “YouTube Creator Studio” app, which provides a much easier interface for iPad (and other iOS device) users to access the YouTube video manager and make changes to published videos. Since we didn’t have access to that app on our iPads yesterday, I used the browser-based YouTube video manager to make changes (including playlists) to our videos which we uploaded to a shared channel.

To help an Android-wielding iPad Media Camper transfer her video to her iPad, I first asked her to install Air Droid on her phone. Then, with my laptop connected to the same wifi network, I typed the IP address and port number provided by Air Droid into my laptop’s web browser. This allowed me to download the video she wanted to my laptop. 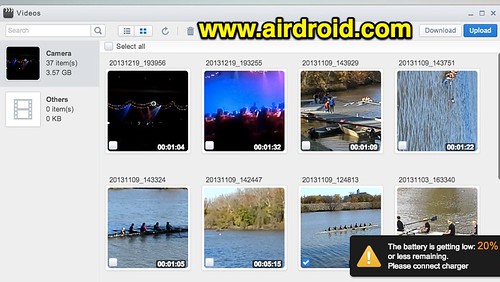 I had asked all iPad Media Camp teachers, by providing a “required app list” prior to the workshop, to install the free iPad app “Instashare” to their iPads. Instashare lets users transfer both photos and videos between iPads. To transfer a video from a laptop or desktop computer to an iPad, however, the $4 Instashare for Mac program is required. Since I don’t own that currently, but I do own the commercial ($3) Photo Sync app for iOS as well as the free “PhotoSync Companion” software program for OS X, I used PhotoSync to transfer the video (which originated on an Anroid phone) from my laptop to my iPhone.

After it transferred over wifi (which took several minutes, even though the video was just 1.5 minutes long, because video files can be BIG) I used the Instashare app on my iPhone to transfer the video to the teacher’s iPad, which was possible since she also had Instashare installed. Both devices must be connected to the same wifi network AND be open to transfer media files.

This was my “app smash” for this process: 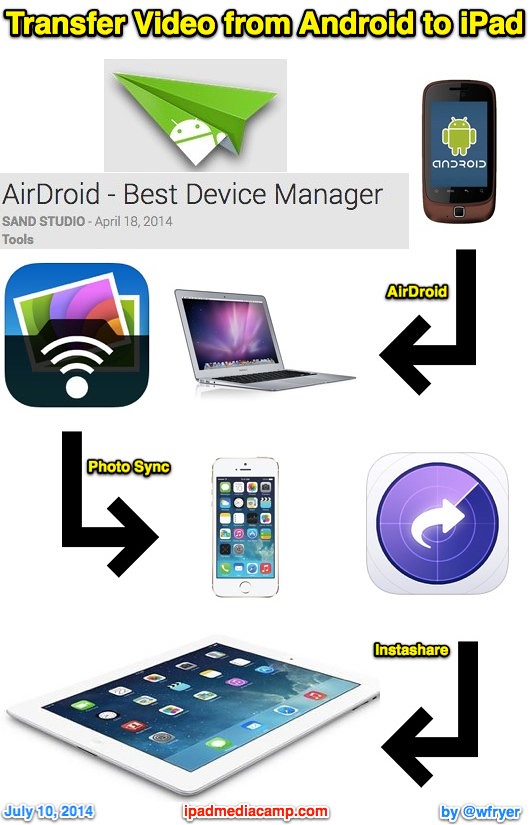 If the teacher had owned or purchased the Photo Sync app for iPad, I could have skipped using Instashare. This process was more complicated than I would have liked, but it did work and didn’t require that we purchase any additional software or apps, since I already owned a copy of Photo Sync for iOS. This is the final video she created (“My quirky niece”) which includes her Android phone video along with other photos and videos taken on her iPad. This was created using iMovie for iPad. She did a great job with the voiceover for these videos!

Check out the other videos our iPad Media Campers in Manhattan, Kansas, created this week! All 11 are included in this YouTube playlist. The paper slide videos participants created are also available in another playlist.

Do you know a faster / easier / better way to transfer a video from an Android phone into the Photo Roll of an iPad? If so I’d love to hear your suggestions and ideas!