This evening I edited, created, and published my first video using an Android-based Nexus 7 tablet. I used the free Android mobile app “WeVideo” to edit it, because it was recommended in this recent Google for Education video about creating stop motion videos in the classroom. I used some images and 1 video clip from last week when I was in Sequoia National Park for this 1.5 minute video.

I learned several important things in this process. Probably the most important is why the YouTube Capture App is not available for Android, but it is for iOS. On Android devices, the YouTube app can be used for uploading, deleting, and making edits to “meta information” on YouTube videos. On iOS, the YouTube app can only be used for viewing videos and adding them to playlists. The YouTube capture app is essential in the toolkit of an iOS videographer, in my opinion, because it allows for flexible uploading to multiple YouTube channels well as some basic video editing.

While the WeVideo Android app does support some very basic video editing techniques, it pales beside the power of iMovie on an iPhone or iPad. The WeVideo app does not support the Ken Burns effect for panning with a zoom in or out of still images, as iMovie does. It also does not let authors change the fixed zoom of a still image used in a video. I also found it awkward to change the selected YouTube video channel for uploading. Unbeknownst to me, my default channel selected in YouTube was not my primary one, so the WeVideo app initially uploaded my video into the wrong channel. I had to delete it in the YouTube app, change my selected channel in my account settings within YouTube, and then upload it again from the YouTube app. I really like and prefer the way the YouTube Capture app for iOS allows users to not only select a Google account but also the channel that is desired. This can be done within the YouTube app for Android, but there is no indication when using the WeVideo app and uploading which channel the video will be sent to.

There are time and space limits on a free WeVideo account, so this app may not be a great choice for the classroom if you and your students will be editing and uploading many videos over the course of the year. The app is free, however, and I am pleased that the visual effects do appear a bit fancier than those obtainable using the YouTube Creator Studio web-based video editor.

Low export resolution is another significant limitation of the free WeVideo Android app. Unless you pay, you can only export your video at 480p resolution. That resolution is still OK for web viewing, but as video goes high definition it will become a more glaring limitation. Free iOS apps like YouTube Capture support video uploads to YouTube of up to 1080p. 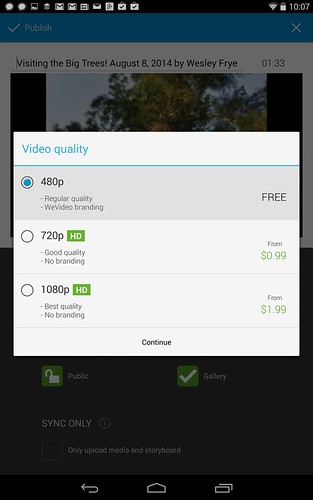 I will write more about this later in a separate post, but I am NOT using this Nexus 7 Android tablet because I am switching platforms entirely. I have wanted to become more familiar with Android based media creation options, because I want to have a more informed opinion as an avid iOS user and educational technology workshop presenter. I was pleased last week to be able to create a multimedia ebook on this Nexus tablet using the Book Creator app. I found it to be very comparable to the iOS version. My experiences with video editing tonight, however, suggest that the Android platform appears to have a long way to go to catch up with iOS for mobile videography.

This post was mobile blogged in the Chrome browser on a Nexus 7 Android tablet.