Update 8/30/2014: Somehow duplicate entries found their way into my app list. Thanks to a tweet from @kiboser I removed them, so the list now includes 70 apps. I also added 3 paid apps I’m going to purchase via VPP this fall: Green Screen by Do Ink, Do Ink Animation & Drawing, and Stick Around. I may also later add some of these 3D visualization apps.

This past summer our school district IT department erased all the iPads used in classrooms like mine to update iOS firmware and install Lightspeed “mobile manager” software to (among other things) track and facilitate app volume purchases. The process of re-installing and reconfiguring my cart of 19 iPads in my STEM classroom was time consuming, but ultimately beneficial since it allowed me to be more selective in the apps I chose to install and make available for students. Previously, there were a large number of games as well as non-STEM related curricular apps on the iPads. The apps were not consistently organized into app folders either, so it could be challenging for students to find apps. (I taught them to use “spotlight” in iOS, but that searching process can be more time consuming for 4th and 5th graders than simply clicking an app icon on the home screen.)

On my personal iPhone and iPad, as well as my class iPads, I’m a fan of organizing apps so everything is available in 1 or at the most 2 screens. When I had my apps scattered over more iOS screens, I found I rarely scrolled through them to find apps. Having everything on 1 or 2 screens means all apps are at most two swipes or touches away after pushing the home screen button. In addition to “home” screen iPad apps, I organized all my STEM class apps this year into the following categories: 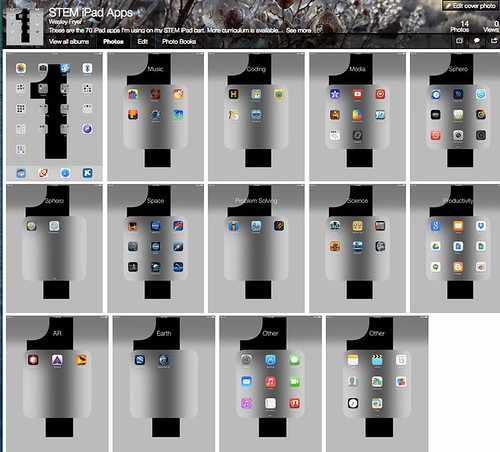 To document and share these 70 apps I chose to include on my STEM iPad cart this year, I created screenshots of each iPad folder and uploaded them to a Flickr album. I also created a linked List.ly list of the apps, which I’ve embedded below. The creative apps I’ve included, which support creating and sharing multimedia artifacts for digital portfolios, are also included within my “Mapping Media” digital literacy framework. For additional app lists, check out the “App Recommendations for Mobile Devices” list complied by EdTechTeacher. Hat tip to Beth Holland (@brholland) for sharing that link earlier today.