Videos, Articles & Books To Get You Thinking About UFOs & ET

My 11 year old daughter, Rachel, is very interested right now in UFOs and the question of whether there is “intelligent life” (E.T.) elsewhere in our universe besides on planet Earth. The past few weeks, and over these last few days of Thanksgiving holidays, we’ve watched most of the episodes in a 2012 TV series now on Netflix called, “Unsealed: Alien Files.” (@unsealed_files) I’d characterize the overall tone of the series as one of “hype” over scientific or objective inquiry, and it’s certainly a program focused more on entertainment than education. That said, however, there are many references to events, books, and individuals who have spoken out over the years on the topic of UFOs and aliens in the episodes that are worth investigating further. The following two minute segment, about “The Battle of Los Angeles” in 1942, will give you a flavor of the series and its style.

Discussing the possibilities for other intelligent life in our universe is certainly an interesting topic for conversation, and it also can provide a great context to discuss verification of sources, how we determine authority, and how we differentiate to weigh credibility of sources. Since the question “Is there intelligent life beyond planet Earth in our universe” is not one with affirmative scientific community consensus presently, it’s a great “shades of grey” topic to discuss and explore with others.  As a STEM teacher, this is NOT something I’m exploring with my students as part of our curriculum, incidentally, but it is something I’ve had students ask about in class. My responses have included things like “you can’t believe everything you read or see online,” etc. which is hopefully a common refrain for teachers relating to Internet searches and digital literacy. My students at school have actually been more interested in zombies and discussing the possibilities of real “zombification” than UFOs and aliens. All these subjects can provide good fodder for discussions about critical thinking and weighing evidence.

Here are three different things I’ve watched or read in the past few weeks as a result of Rachel’s interest UFOs and aliens which are worth checking out further. References to these were made in the “Unsealed” TV series episodes in the first two cases, and the third was referenced in the first video.

The first is a 26 minute documentary video clip from a January 2014 episode of the television program “Russia Today,” which featured an interview with former Canadian Defense Minister Paul Hellyer. For more background about this, read the section in his English WikiPedia bio page on “Extraterrestrial issues.” Hellyer is the first former or current G8 cabinet official to publicly assert that aliens are real, have been visiting earth for thousands of years, and currently are collaborating with the United States government. He has called for openness and transparency and an end to a decades-long U.S. policy of classification and obsfucation when it comes to questions about UFOs and actual E.Ts. Yep, this is pretty radical stuff. Given his background and credentials, it’s worth watching and considering no matter what your current opinion may be on these subjects.

The new 2014 movie about the life of Steven Hawking, “The Theory of Everything,” is now out in U.S. theaters. Hellyer criticized Hawking’s public statements about aliens back in 2010, accusing him of fear-mongering by portraying aliens as universally having malevolent intentions for interactions with people on Earth. I haven’t seen the latest Hawking movie but hope to over the Christmas holidays. Until seeing the “Unsealed” episodes, I hadn’t heard about Hellyer or his claims relating to UFOs and aliens.

The second thing I’ve encountered recently related to these issues is a lengthy article from 2012 titled, “our speaker tonight: josef allen hynek.” Again I would recommend reading the English WikiPedia bio article for J. Allen Hynek. A distinguished astronomer and professor, he was a primary consultant to the official series of U.S. Air Force initiatives investigating UFOs, including “Project Blue Book.” Significantly, over time, Dr. Hynek’s views on UFOs and on the U.S. military’s official handling of UFO reports changed 180 degrees. He was initially a “debunker” of UFO reports, but over time his predisposition to reject the validity of eyewitness UFO accounts changed. The stories he relates of UFOs reported by credible sources, which  he could not discount as a scientific investigator, are worth reading and difficult to dismiss out of hand. As was the case with Hellyer, I hadn’t heard of Hynek previously before watching the “Unsealed” epsiodes. Hynek wrote 3 books on UFOs, but not all are available as eBooks.

The last thing I’ll mention is a book series which Paul Hellyer talked about in his January “Russia Today” interview. This is the “Milennial Hospitality” book series by Charles James Hall. Hall was an enlisted airman in the US. Air Force in the 1960s, and claims to have worked directly with aliens in Nevada at a secret base. The first several books in his series were written as if they were fiction, but later editions are presented as factual. I had never heard of the “tall whites,” the alien race Hall claims to have worked with, or his wild claims that living aliens continue to collaborate with the U.S. government on secret military bases in Nevada.

When it comes to websites, books and videos about UFOs, it’s easy to quickly find yourself deep within content that sounds outlandish, crazy, and filled with conspiracy theories. The OpenSETI.org page, “Charles Hall and the Tall White ETs,” is one example of a site like this which I ended up reading after hearing Hellyer recommend Hall’s books and his extraordinary, alleged USAF experiences with aliens. I certainly have no firsthand knowledge or experiences with these issues which would affirm the credibility or believability of any of these sources. I will close, however, with two stories which have and continue to shape my own opinions and perceptions of questions about UFOs and aliens.

My grandfather on my mom’s side, Richard Henley, was a HAM radio enthusiast and was extremely interested in the Air Force’s “Operation Blue Book” initiative. He was a very smart person, and he become convinced over time that the U.S. government was deliberately covering up information which it possessed about UFOs and intelligent life beyond our planet. When someone close to you like this has a strong opinion, it’s natural for that person’s views to influence you. I wouldn’t say I founded a “belief” in UFOs and intelligent extra-planetary intelligence on the views of my grandfather, but I certainly have had my mind opened to these possibilities to a greater extent because of his opinions based on lengthy research.

The second thing which strongly influenced my perspectives on these questions happened in the fall of 1992 when I was in pilot training for the U.S. Air Force. Since I had completed “basic freefall parachute training” (jump school) at the Air Force Academy, which includes successful completion of five freefall parachute jumps, I was exempt from the parachute training my classmates received during one of our groundschool training days. Pilot trainees received basic instruction in the PLF (parachute landing fall) and then were pulled into the air by a pickup truck while they wore a parachute, so they could practice “real” PLFs. This involves a little danger, since it’s possible to twist a knee or sprain an ankle doing PLFs, so that day of training I got to ride in the pickup with an airman and watch my classmates practice PLFs.

I remember that day of training very clearly because of the conversation I had with the airman who was driving. We had a far ranging conversation during the day, and part of it focused on UFOs and Area 51 specifically. He had not been to Area 51 or been assigned there, but a close friend of his had been. That friend was in the Air Force Security Police, which provides base security at Air Force installations. Among other things, his friend told him about UFOs which he had personally seen and guarded at Area51, which were saucer-shaped craft that he believed were alien. The airman with whom I spoke believed that an alien spacecraft had been recovered by the US Air Force in 1947 at Roswell, New Mexico, and that three alien bodies had been recovered as well. He believed one had been sent to Brooks AFB in San Antonio, one to Wright Patterson AFB in Ohio, and one to Area 51 in Nevada.

Of course this is third-hand heresay which was not coming from a first-person witness, so perhaps I should have dismissed these stories out-of-hand and still regard them as not credible. When you hear someone speaking earnestly about events and experiences like these, however, at certain times of your life it can make quite an impression and those did for me in 1993. Our family visited the UFO museum in Roswell in 2010, on a spring break trip to California, and the experience of reading through the many articles and declassified military documents which are on display there raised more questions than they provided answers. 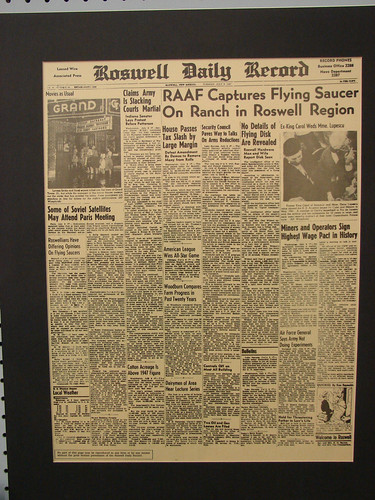 It’s going to be very interesting to see if the United States government and government officials (both past and present) decide to pursue in upcoming months and years, as Hellyer and others have called for, a greater level of transparency and truth telling with respect to “what we know” about UFOs and aliens.

Here’s a final resource. As a politician, discussing UFOs and aliens publicly is a “third rail” that most avoid like the plague. That was one observation among many in Alexandra Petri’s May 2013 article for the Washington Post, “Believe in UFOs? Highlights of the Citizen Hearing on Disclosure.” The website www.citizenhearing.org includes videos of testimonies shared in 2013 at a unique event at which six former members of the U.S. Congress were paid $20,000 each to listen to tales of UFOs and aliens. According to the website:

From April 29 to May 3, 2013 researchers, activists, and military/agency/political witnesses representing ten countries gave testimony in Washington, DC to six former members of the United States Congress about events and evidence indicating an extraterrestrial presence engaging the human race. The Citizen Hearing on Disclosure was an unprecedented event in terms of size, scope and the involvement of former members of the U. S. Congress. With over 30 hours of testimony from 40 witnesses over five days The event was the most concentrated body of evidence regarding the extraterrestrial subject ever presented to the press and the general public at one time.

The official YouTube channel of the Citizen Hearing on Disclosure has a wealth of videos that can take you further down the rabbit hole.

Our access to information and varied perspectives on controversial topics, like UFOs and aliens, has never been greater. We all need to practice media literacy as well as critical thinking skills. While these subjects may not be part of your formal curriculum, they certainly can be topics of fruitful conversation with family and friends. There’s a lot to talk about, think about, and consider. 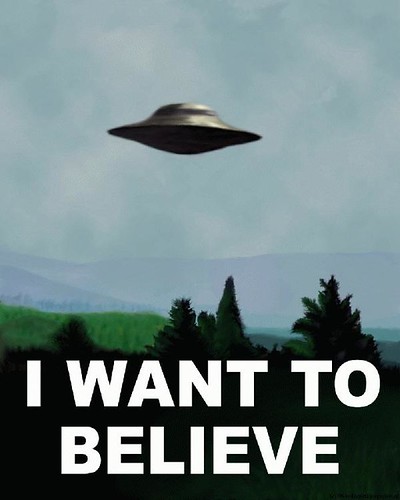