Creativity, Connectedness and the Adjacent Possible

One of my favorite quotations is by Steven Johnson, who asserts that “Chance favors the connected mind.” Who we associate with, the environments in which we live and work, and the historical context in which we live have a profound impact on our creativity and the ideas to which we are exposed and develop. In the January 2015 issue of National Geographic magazine, in the article “Origins of Art: First Artists,” we read the following:

So how do we explain these apparently sporadic flare-ups of creativity? One hypothesis is that the cause was not a new kind of person but a greater density of people, with spikes in population sparking contact between groups, which accelerated the spread of innovative ideas from one mind to another, creating a kind of collective brain. Symbols would have helped cement this collective brain together. When populations again fell below critical mass, groups became isolated, leaving new ideas nowhere to go. What innovations had been established withered and died.

These words make me think about my life as a classroom teacher today, and the ways in which the structure of our school and school systems generally promote isolation rather than connection. Creativity, culture, and intellectual growth depend upon connections. Those connections, in turn, depend not only on our historical context but also on the relationships we have and the interactions, both intentional and accidental, which we have with “the brains of others” on a regular basis. It is vital that no matter where we find ourselves as teachers and learners, we seek to be connected with others. “Chance favors the connected mind,” and no one has lived in a better era to have connected minds than humans on earth today in 2014.

In addition to checking out this wonderful National Geographic article about the origins of symbolic communication and culture, check out Steven Johnson’s books, “How We Got To Now: Six Innovations That Made The Modern World” and “Where Good Ideas Come From: The Natural History of Innovation.” Stephen also worked with PBS to create an awesome series of television episodes for “How We Got to Now.” They are well worth your time to watch. I’ve seen several of these via the PBS channel on AppleTV, but unfortunately they are set to expire on AppleTV so depending on when you read this, they may not be available there to watch. They may still be available online however and if so, add them to your to “watch later” video list! 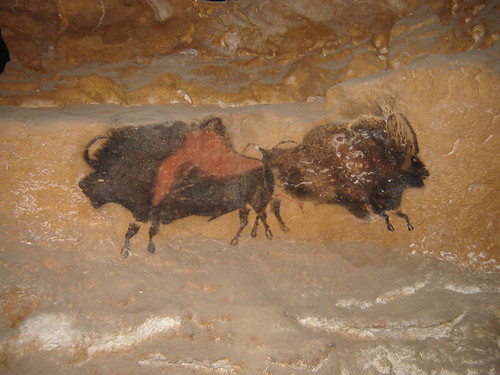 Mobile blogged with an iPad using WordPress for iOS.