This week for our first 10 minute “curiosity links” time in STEM class this semester, I’m sharing the video, “Janna Levin: I’m Still That Same Kid. It’s part of the series NOVA’s Secret Life of Scientists and Engineers. Janna’s description of how she felt challenged growing up because she loved BOTH art and science makes this a perfect video to share with students if you want to discuss STEAM: Science, Technology, Engineering, ART and Math. It’s also a fantastic platform to use when encouraging students to stay CURIOUS and keep asking lots of good questions!

Janna Levin is an extraordinary person. According to the English WikiPedia article for her:

Janna J. Levin (born 1967) is an American theoretical cosmologist. She earned a PhD in theoretical physics from the Massachusetts Institute of Technology in 1993, and a Bachelor of Science in Astronomy and Physics with a concentration in Philosophy, from Barnard College in 1988. Much of her work deals with looking for evidence to support the proposal that our universe might be finite in size due to its having a nontrivial topology. Other work includes black holes and chaos theory. Since January 2004, she has been a professor in astronomy and physics at Barnard College of Columbia University. 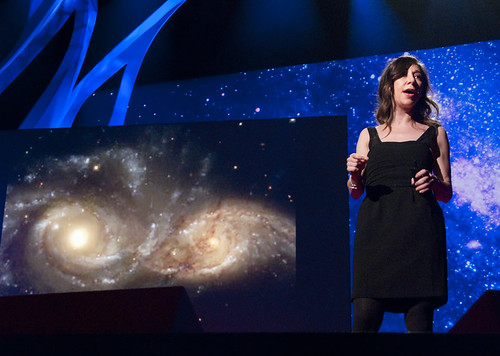 Janna’s TED Talk from 2011 is “The Sound The Universe Makes.”