Thanks OKeducationTruths (Rick Cobb) For Your Courage & Leadership

Tonight was a momentous evening for Oklahoma education. Not only was it one of the most lively #OklaEd twitter chats in which I’ve participated to date, it also was the evening the author of the extremely important and influential blog, OKeducationTruths revealed his true identity.

The author is Rick Cobb (@grendelrick), and his well written post revealing “the man behind the curtain” tells a great deal of the nightmare which has been Oklahoma educational policy the past four years under elected state superintendent Janet Barresi (@janetbarresi). This afternoon and evening in anticipation of the @okeducation reveal / announcement, many #OklaEd twitter users started changing their profile pictures to different masked characters. It was an organic, grassroots, show of solidarity and support for @okeducation and the important advocacy work Rick has done over the past several years in his words, “when the record on public education in Oklahoma needs to be set straight.” It was also, IMHO, a clever visual demonstration of the way Oklahomans SHOULD see classroom teachers in our schools: As superheroes!

After our Twitter chat tonight was over, I thought it would be great to create a collage of the Twitter profile images of everyone who had changed into a masked character to show support for Rick. Initially I started making the collage of just the images, but I decided it would be better to show the names and Twitter IDs of each person, so I started over. This is the final result, which I tweeted and also posted to Flickr as a 1600 x 1200 image suitable for use as desktop wallpaper. (On a technical note, I created this using Seashore software (a free port of Gimp) and Skitch software (also free.) By sheer coincidence, I chose a Hong Kong Phooey avatar for the occasion, which Rick also used on his @grendelrick account. 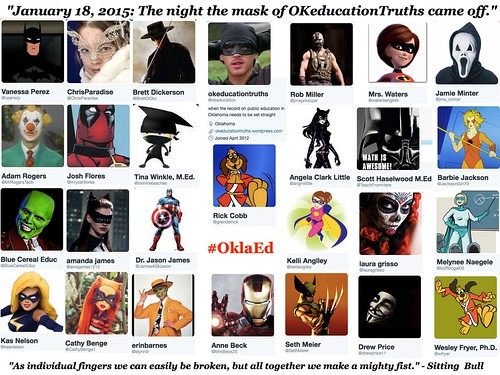 Thanks to Rob Miller for suggesting the title of the collage, and Sitting Bull for providing the closing quotation.

@wfryer This will be awesome! Can you add a title? Something like "January 18, 2015: The night the mask of Oktruths came off."

I want to personally thank Rick for not only the time and effort he has put into the OKeducationTruths blog the past several years, but also for his courage and leadership in demonstrating how we are called to act as public servants when elected officials make immoral choices that harm others. I thank God daily that we live in a nation where we can still openly express our views and advocate for change without fear of imprisonment or death. Certainly speaking out has consequences, and over the years I’ve had a few of those myself as an educational blogger and advocate, but it’s nothing like what people face today in countries like Saudi Arabia, Iran, North Korea, Yemen, and Syria. I know it’s easy to get pessimistic when we watch the news and hear about the difficulties people are facing in all corners of the globe. One of the most important and constructive things WE can do as citizens of the United States today, however, is exactly what Rick Cobb has been doing via the OKeducationTruths blog since 2012. We can speak out, we can cry “foul” when we see them committed by public officials, we can advocate for change, and we can promote the causes of transparency and true accountability in public service.

It was extremely inspiring and rejuvenating to be “in the midst” of the support for Rick this evening during and following our #OklaEd chat. As teachers, parents, administrators, librarians, community members and citizens of Oklahoma, we are speaking out and speaking together via social media louder than ever before. And, the good news is, together we’ve gone to the ballot box and brought an end to a dark chapter in the educational history of our state. We now have an educational leader who is listening and wants to move forward with us. What a welcome change from the past four years.

Here are some of the statements from Rick’s post tonight which stood out for me, for different reasons.

As a Storychaser, I’ve learned over time in the past 8 years that “there are some stories I don’t have the right to tell.” I can try to empower others to tell those stories, but I can’t tell them myself. This was stated well by Rick in his post in the following paragraph:

Those who personally know me understand why I don’t like to talk about the tornado. For a while after the storm, I figured the blog really didn’t matter. Eventually, it was one of the things that helped me heal. I have rarely mentioned the storm or our district’s recovery on okeducationtruths because I don’t feel like that’s my story to tell. It’s a shared experience among all of us who’ve been through it. I decided this really wasn’t the place to open a window into the district.

Blogging and writing for an authentic audience (especially other teachers) is an extremely important and rewarding activity. It saddens me to see how many in academia are still pressured to publish articles in arcane/unknown journals that will most likely be read by a minuscule number of people. Tragically, graduate work in our universities today can literally kill the desire to write. Rick also addressed this, but hopefully shared how blogging rekindled his own writing desire:

This blog has helped me find my professional (and occasionally unprofessional) voice. It has rekindled my love of writing – something graduate school had killed.

Blogging can inspire others. It can create a virtual family of sorts, as one person inspires another to beget a new blog. This happened to Rick:

Rob [Miller] has told me that he owes his blog to me having mine. Similarly, I owe mine to Claudia [Swisher] writing hers.

Our voices matter, no matter what our position or place in society. As educators, many of us are not accustomed to speaking out on issues. As we face significant challenges from groups which seek to destroy public education and open its coffers to private corporations, however, we cannot stand idly by and watch. Rick recognized the vital role Oklahoma education bloggers have played in the past couple years in changing the course of our educational policy “ship of state:”

Collectively, we have turned back a wave of people who seek to destroy our schools. Most Oklahomans support public education. Those who don’t have to manufacture a crisis to chip away at us. I think people understand this better than they did before I started writing.

In addition to giving thanks and praise for the freedom of expression which we enjoy and can exercise in our nation, I am also deeply thankful that mainstream media outlets no longer have near-monopolistic control over the means of publication. In Oklahoma, it’s eye-opening to see the dramatic differences in the way educational policy is discussed in our two largest newspapers: The Daily Oklahoman / NewsOK (Oklahoma City) and the Tulsa World. Social media and the fragmentation of publishing sources has pros and cons, but on balance it’s a GREAT thing that citizens in our state have more choices when it comes to news and information. Rick’s voice on his blog, and the voices of others (hopefully I also contributed in a small way) have been vital in helping inform Oklahoma voters about the nightmare which public school teachers endured under the failed leadership of Janet Barresi. Her primary message, that “public education is failing and public school teachers are to blame,” is and was a LIE. Rick’s tireless posts helped uncover that for Oklahoma voters to read, see, and understand. Rick regrets his blog became so focused on Barresi, but I agree with his analysis, given the circumstances it was unavoidable:

Anonymity has its time and place. I’m thankful Rick was able to stay anonymous in the public eye while Barresi was in office. As sad as it is to realize, Janet developed a “reputation as a vindictive leader” with good cause. Rick explained:

At the same time, I really didn’t want to draw the SDE’s attention to my employer. After everything else, we really didn’t need that extra hassle. We do our jobs and serve our community. We follow the rules. Nonetheless, with Barresi’s reputation as a vindictive leader, I didn’t want to invite her wrath. Ask Rob Miller. Ask any number of employees at the SDE who feel fortunate to still have their jobs. This was a concern of mine until noon on Monday.

Thank you Rick Cobb, Rob Miller, Claudia Swisher, Jason James, Brett Dickerson, John Thompson, and many other Oklahoma education bloggers who have courageously spoken out to not only “set the record straight,” but to change hearts and minds of Oklahomans who care about our kids and our public schools. The challenges ahead are formidable, but so are the collaborative tools we have at our disposal to utilize in our cause.

And… because I inadvertantly left Claudia off the first version of tonight’s commemorative #OklaEd Twitter avatar collage, here’s version 2.0 with her superhero masked avatar included! 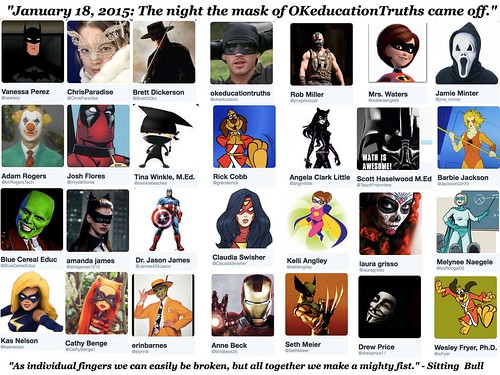 2 Responses to Thanks OKeducationTruths (Rick Cobb) For Your Courage & Leadership