For the past couple months, my son has had problems charging his iPhone5. The cable wouldn’t consistently make contact, so sometimes the phone would fully charge overnight, and sometimes it wouldn’t. He had to adjust the lightning adapter plug “just right” so it would charge, and we weren’t sure if this was something that could be repaired or if we’d need to actually buy him another phone. Today we FINALLY took his iPhone in to our local Apple Store, and learned the reason for his battery charging woes: A sizable collection of pocket lint compacted into a small ball inside the lightning port. Yes: It took a real “Apple Genius” to figure this out and get it fixed for us! 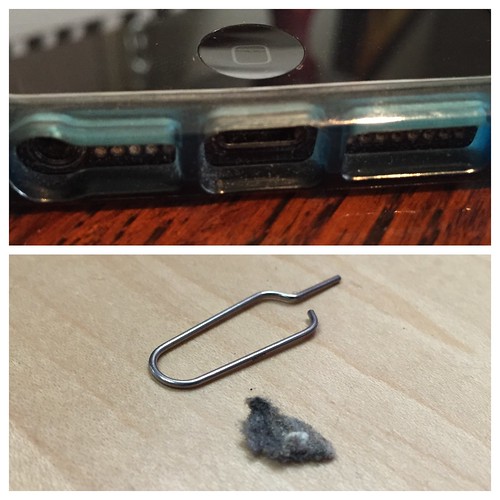 The story gets even better, however. My son’s iPhone5 was originally mine, and we’d both experienced problems with the phone not holding a charge for an entire day. It turns out that iPhone qualified for Apple’s “iPhone 5 Battery Replacement Program.” We qualified for a free $80 battery replacement. When the Apple technicians got the iPhone open, however, they saw the battery had “swelled” which made replacement impossible. Result? Apple gave us a brand new iPhone5: the same 64GB model we’d had previously.

I wish we’d taken Alex’s iPhone into the Apple Store sooner! I absolutely love having a local Apple Store and Genius Bar nearby. Beware the hazards posed by pocket lint to iPhone charging and smartphone charging more generally! Thank you Apple! 🙂

One Response to iPhone Charging Mystery Solved: Pocket Lint Was The Culprit