Spinning a Revised History of Genghis Khan with Media and Exhibits

Shelly, Rachel and I are in Philadelphia for several days attending the ISTE Conference, and spent a couple hours this evening exploring the new Genghis Khan exhibit at the Franklin Institute. I was especially keen to experience this exhibit since I  downloaded and listened to most of Dan Carlin’s enthralling “Wrath of the Khans” series on his Hardcore History podcast in May. (@hardcorehistory) I learned about Dan’s podcast series, oddly enough, from a Boeing aerospace engineer who came and shared a presentation for our Makers Club last year for our final meeting. Our conversation prior to Makers Club that day turned to technology and podcasts, and he mentioned “Hardcore History” as one of his favorites. So via this rather oblique reference, I’ve been learning and thinking about Genghis Khan in quite a bit of depth (certainly more than “normal” for me) in the past two months. Dan’s series confirmed the shallow depth of my own prior knowledge about Genghis Khan and the Mongol Empire, and my significant underestimation of the horrific brutality and almost unimaginable scale of carnage wrought by Khan throughout Asia during his life and the succeeding generations of rule by his progeny.

Before explaining why I’ve titled this post “Spinning a Revised History,” I’ll recap a few highlights of the exhibit with some photos and descriptions. 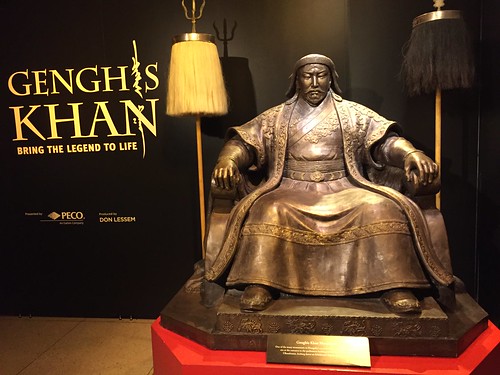 A visit to the Genghis Khan exhibit at the Franklin Institute isn’t cheap, and does not include “general admission” to the museum. It was great to be able to order our tickets for “will call” pickup from my iPhone, but the final price of $55 seemed a bit steep. 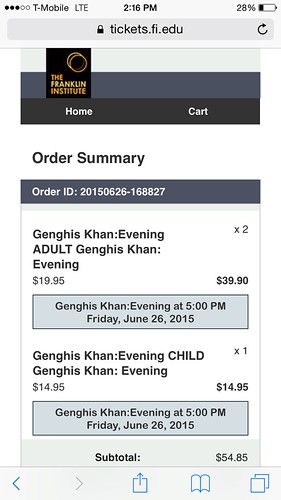 Several of the ideas emphasized by Dan Carlin in his “Wrath of the Khans” podcast series are also repeatedly emphasized in this Genghis Khan exhibit: 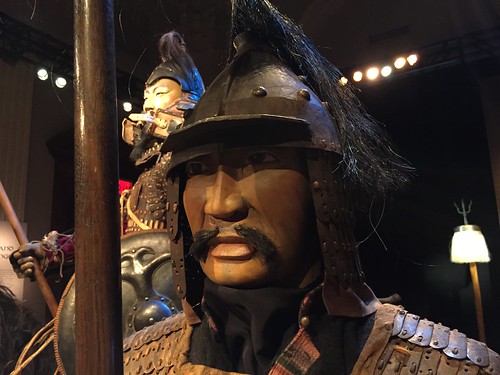 I’ve always been fascinated by the (historical) Silk Road, stories of Samarkand, and Central Asia. I’ve visited China four times since 2007, and was able to visit both the Shanghai Museum as well as the Silk Museum in Hangzhou. In 2011 I read the amazing book “The Fourth Part of the World” by Toby Lester (@tobylester4), which addresses (among many other things, this is one of my favorite books of ALL time) Marco Polo and historical Western conceptions of China and Eastern Asia. Despite these interests and experiences, the “era of the Mongols” has always been a bit confusing for me. Growing up in the midwest of the United States, most of my world history class studies in high school as well as college (as I recall) presented the Mongols as more of an interruption in the historical timelines of Western Europe, rather than a unique global phenomenon worthy of study and understanding it its own right. If this confused historical perception of the Mongols is common, I suppose improving and further developing that among U.S. citizens as well as other museum visitors is a major goal of this current exhibit.

One of the things our visit to the Genghis Khan exhibit today helped clarify for me was that when Marco Polo traveled to (what is today) eastern China, and lived there for 17 years, he did NOT experience court life and culture under the rule of the dynastic Chinese. I know I’ve read about him meeting and living under “the Great Khan,” but today the pieces finally fit together for me that the ruler he met was Kublai Khan, a grandson of Genghis Khan. The name “Kublai Khan” does not have a lot of meaning or schema for students who have primarily focused on history from a Western European / U.S. perspective, but after today’s exhibit visit I feel like I cognitively am understanding some of these chapters of history better. My big “a-ha” moment today was: “Marco Polo didn’t live 17 years in the court of a dynastic Chinese emperor. He traveled to eastern China and lived there during the rule of a Mongol usurper, Kublai Khan, whose family had (in historic perspective) only recently come to power in China.” This may not be a big learning point for others, but it definitely was for me today. 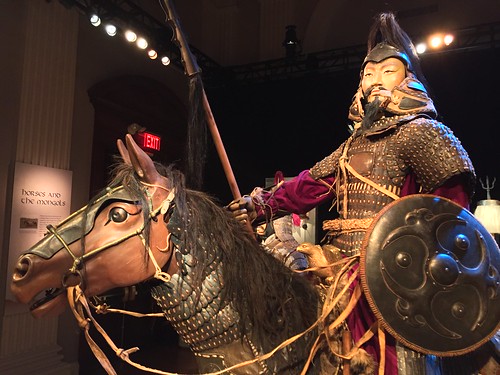 I do recommend visiting the Genghis Khan exhibit if you have the opportunity, even though it’s a bit overpriced, but I want to close by noting several of the ways the exhibit’s curators and authors attempt to “spin history” to portray Genghis Khan in a more favorable and kind light than other historians have.

The last area of the exhibit is “Mongolia Today.” 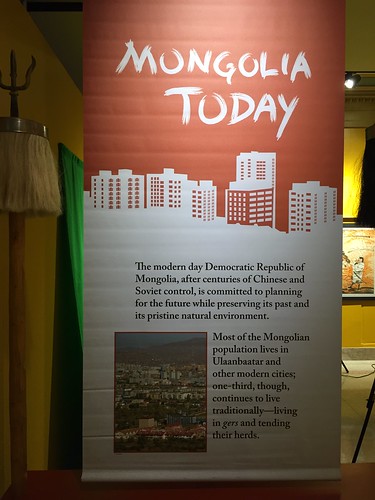 Among other things, it offers exhibit visitors the opportunity to “Get your picture taken in Mongolia” thanks to the magic of green screen photography. We visited in the evening, however, when this part of the exhibit was not staffed. 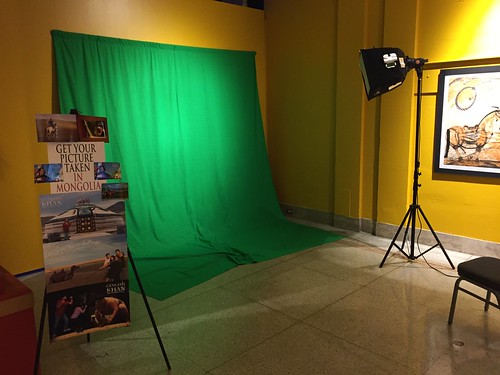 The final exhibit display, before the small gift shop of “fair trade” Mongolian souvenirs, is titled, “Brought to You by Genghis Khan.” The final sentence reads:

The next time you eat a hamburger, put on your pants, shout “Hooray,” or play the violin, remember to thank Genghis Khan. 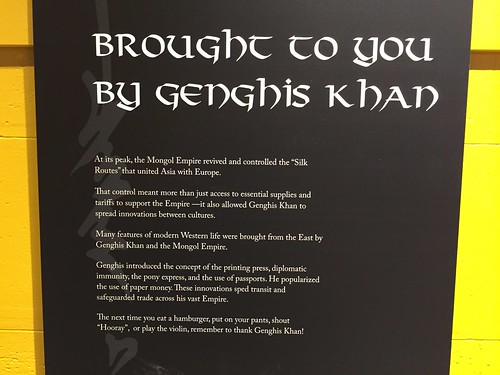 While the influence of Genghis Khan on those four things is historically documented and important, I find this to be a ridiculous “final thought” for this exhibit. Instead of thinking about Genghis Khan with thanks when I eat my next hamburger, when I think of him I’ll continue to try and fathom the unthinkably brutal rape and slaughter of thousands upon thousands of human beings at his hand and by his command. Certainly historians can identify some positive developments from any era of human history, but no one personally responsible for the rape and brutal death of so many human beings deserves our “thanks.” According to Evan Andrews’ April 2014 article for the History Channel, “10 Things You May Not Know About Genghis Khan,” he was directly responsible for the deaths of approximately 40 million people. Genghis Khan is not a historical figure who deserves anyone’s thanks.

In another display in the final part of the exhibit, “the genetic legacy” of Genghis Khan is addressed. My photograph of the display text below does not show the accompanying icon in the lower right corner, but it is a Mongol warrior on horseback holding a spear. Given the context of this discussion, it would be more appropriate to show some kind of icon signifying “rape,” although I don’t know how a museum curator could do that in a “politically correct” way. In case you can’t view this image, I’ll transcribe the paragraph:

Recent genetic studies indicate that at least 16 million men living today are descendants of a Mongolian male who lived around 1,000 years ago. That’s one in every 200 males who have identical Y chromosomes, a block of DNA passed on unchanged from father to son through generations. They all share the same random mutations. 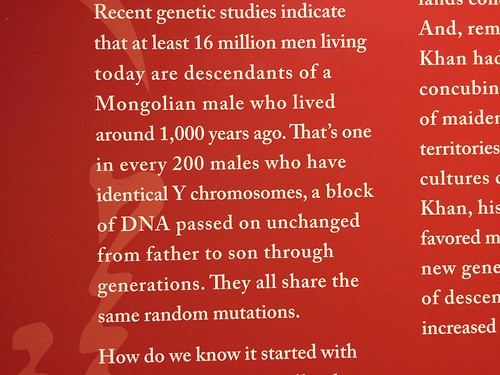 What is not stated in clear terms in these paragraphs, but should never be forgotten any more than the Holocaust of World War II,  is that these patterns of DNA heredity in the human genome are the direct result of systematic rape. For further reading on this, I recommend Hillary Mayell’s February 2003 article for National Geographic, “Genghis Khan a Prolific Lover, DNA Data Implies,” Evan Andrews’ April 2014 History.com article, “10 Things You May Not Know About Genghis Khan,” and the English WikiPedia article, “Descent from Genghis Khan.” Along with the numbers of people he is responsible for killing, this also defines the historical legacy of Genghis Khan: He raped more women than any other human being in history. No, Genghis Khan does not deserve our thanks for the hamburger, pants, the violin, or anything else.

A final historical note of interest regards Japanese Kamikaze winds, or typhoons. In Japanese, Kamikaze translates as “divine winds.” Back in November of 2014, I retweeted a link to a National Geographic article, shared by author Candice Millard (@candice_millard), titled, “Japan’s Kamikaze Winds, the Stuff of Legend, May Have Been Real.” This is a fascinating chapter of east Asian history, which I’m guessing Toby Lester also discusses in his aforementioned book. Basically, in 1274 and 1281, “coincidentally” at precisely the times the Mongols attempted to invade and take over mainland Japan, two different typhoon storms struck the area and demolished the navies of the Mongols. It’s hard to imagine anyone in Japan at that time questioning  “the divine origins” of those storms.

Legends of Kamikaze Winds (after which WWII kamikaze pilots were named) saving Japan from Kublai Khan may be real: http://t.co/X4v8eRyxfo

At the Genghis Khan exhibit in Philadelphia today, I was intrigued to see several artifacts recovered from the South China Sea which archeologists and historians believe to have been from those Mongol invasions thwarted by the Kamikaze winds. 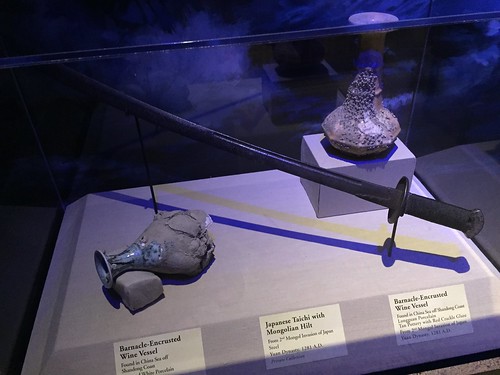 That’s amazing history, and a story worth sharing with your own students next time your curriculum (or your own interests) turn to Genghis Khan, the Mongol Empire, Japanese History, severe weather including tropical cyclones, or any other oblique entry points you can find into this enthralling chapter of world history. For more on this, check out the Encyclopedia Britannica article, “Kamikaze of 1274 and 1281.”

If you’ve read to the end of this post, you probably better understand some of the reasons why I love geography and history so much! The layers of complex human interactions form a rich tapestry, and we’re fortunate to live in an era when we can have more opportunities than any previous generation to explore and examine those threads.