At the start of this semester I decided it was time for a new home printer. With 2 kids now in high school and 1 in 6th grade, reliable home printing is a necessity rather than a luxury. Our old printer worked fine, but since we now have several Chromebooks in our family laptop mix, I decided it was time to have a Google Cloud Print compatible model. I also wanted to get a printer that would work with AirPrint, in the infrequently likely but possible situation that one of our family members wanted to print something directly from an iPhone or iPad. Both these wireless printing technologies were absent from our slightly old Lexmark USB printer. At a local Staples store, a salesman enthusiastically recommended the Brother MFC-J4420DW Inkjet All-In-One Printer based on these professed needs. At $100, it supports both Google Cloud Print and AirPrint, as well as scanning/faxing (features of less interest to us). The printer cartridges looked like they were in the same price range as our Lexmark, so I went ahead and made the purchase. 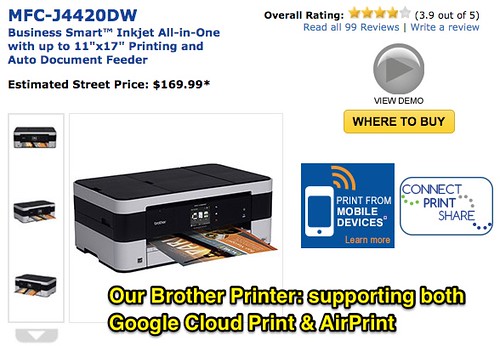 After using the printer for several months, including pretty heavy use by our kids for school assignments, I’m generally pleased with it and would recommend it to others. The only frustrating thing that’s happened a couple times, however, and I seem to have finally resolved tonight, is when the Google Cloud Printer configuration mysteriously “goes offline” and stops working on our Chromebooks.

If you turn to Google for answers about this issue, there are plenty of forum posts with titles like “[Google Cloud Print] Keeps saying printer is offline.” Some of the recommended fixes for our problem which I tried unsuccessfully were:

Here is what finally worked. 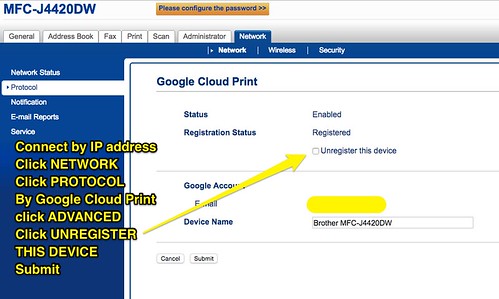 Thanks to Todd Kaufmann’s November 2014 post, “Google Cloud Print — getting offline printers back online (for Chromebook, or other devices)“, I had learned earlier in this troubleshooting saga that I could type the following in the address bar of my Chrome web browser to access the setup and management menus for Google Cloud Print:

When I used this menu, I was able to successfully register my Brother printer again as a Google Cloud Printer. The first attempt failed for some reason, but the second attempt was successful. 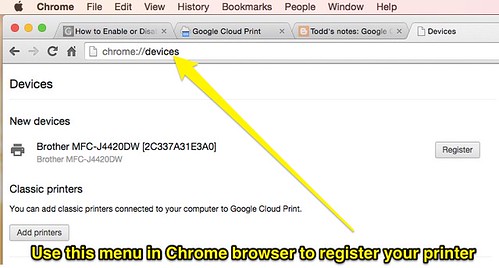 When this problem first happened several weeks ago, I thought the problem was the printer’s dynamic IP address. Assigning a static IP and re-registering with Google Cloud Printing didn’t work, however, it still went offline again. I’m hopeful that if it goes offline again, I’ll be able to directly connect to it via IP address and force it back online as a Google Cloud Printer.

If this article proves helpful to you in troubleshooting your own problems with Google Cloud Printing, please let me know with a comment below or by sending a Twitter reply to @wfryer.

Google Cloud Print is a great concept and a workable technology, but apparently there are (as almost always is the case) a few more bugs for developers to work out.