Make a Windows Laptop Into a Chromebook with Chromixium

We have two new Dell Latitude 3150 laptops at school, which we initially purchased and setup with Windows 10 as an operating system. I learned this week that the hardware of the Latitude 3150 is the same Dell is using for their Chromebook line. If you order with Windows, you pay more for the OS licensing.

I want to explore the option of setting up a dual boot environment so if desired, our students using these laptops can boot into the Chrome OS and the laptop will function just like a Chromebook. Chromebooks are much less prone to malware when students visit gaming & other websites on their own time outside of school, and are easier to support from an IT standpoint than laptops running Windows. Here’s what I did this afternoon to get one of these laptops setup to dual boot essentially as a Chromebook. All the software I used to do this is free. 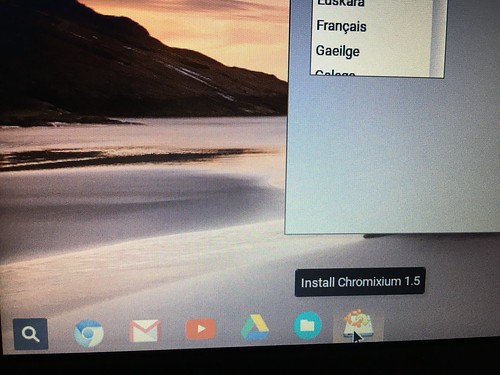 After the installation completed, I restarted the Dell Latitude 3150 laptop and it booted into Chromixium, and looks almost identical to a Chromebook. Since the hard drive isn’t solid state it boots a little slower, but still pretty fast. The one difference is the default browser which comes with this Linux distribution is Chromixium, rather than Google Chrome. If you switch into developer mode you can change the default browser to Chrome, but I’m going to hold off on doing that for now. I’m thrilled to now have the option to dual boot into Windows 10 or the Chrome OS on this laptop!

THANK YOU Chromixium OS development team! I’m eager to try this next on the Dell Mini 10 we purchased about 5 years ago and still have laying around at home (mostly unused) that runs Windows 7.

This 9 minute video from the Chromixium team may also be of help if you’re trying this yourself.