Like many U.S. voters today, I’ve been largely unimpressed and uninspired by most of the news I’ve read and heard about our 2016 Presidential candidates. One exception to this was the short-lived candidacy of Larry Lessig. This evening, however, I took an hour to watch the November 19, 2015, address by Bernie Sanders at Georgetown University titled, “Democratic Socialism.” As a result, I am feeling both inspired and more optimistic. If you don’t have time to watch this now, save this YouTube video in your “watch later” playlist. If you’re not sure how to do this, instructions are available from Google!

I agreed with every point Sanders made in this speech that I can recall. I agree with him that people do not have true freedom until they have economic security. He quoted President Franklin Delano Roosevelt’s 1944 State of the Union address, when he proposed a Second Bill of Rights. Thanks to the work my wife does as a teacher in a classroom of homeless students every day, I regularly hear about the stark realities of life for those living in poverty. Sanders is not calling for government to seize and operate “the means of production” in our nation, but he is calling for fundamental changes in the ways we have allowed wealthy individuals as well as corporations in our nation to write our tax laws.

I agree with Sanders’ points about Wall Street and the 2008 recession. I listened to the audio version of the book, “All the Devils Are Here: The Hidden History of the Financial Crisis” in 2011. I’ve been wanting and yearning for the kind of populist revolution that Sanders is encouraging for many years. See my October 2011 post, “Connect the Dots: The Political Revolution We Need in the USA” for more background. Only by mobilizing US citizens to first vote, and secondly support a unified agenda for economic tax law change in our nation (along with the kind of campaign finance change espoused by Lessig and others) can our political status quo in the United States meaningfully and constructively change.

I agree with Sanders’ rejection of the racism injected into US politics and culture today by Donald Trump and others. It is unfortunate our mainstream media focuses so much attention on Trump, but as an outlier, he attracts eyeballs. If you’ve read Neil Postman‘s outstanding 1985 book, “Amusing Ourselves to Death: Public Discourse in the Age of Show Business,” you can understand why these dynamics persist… but still not condone them.

Thank goodness for social media and “publish at will” electronic communication! A few weeks ago when I installed our new 4th generation Apple TV at home, I stumbled on the official Bernie Sanders Apple TV app in the store. That’s how I found the “Democratic Socialism” video tonight. I was drawn to it among other choices, however, because I heard a recent NPR story on it before Thanksgiving. This was the best political speech I’ve ever watched. I highly commend it to you.

Sanders’ discussion of foreign policy issues, and ISIS in particular, was spot on near the end of his speech. I agree we must treat unilateral military action as a last resort, rather than a first resort. I also agree that the 1953 US/CIA overthrow of the democratically elected Prime Minister of Iran, Mohammad Mosaddegh, along with the overthrow of Guatemalan President Jacobo Árbenz in 1954, were both terrible foreign policy mistakes with tragic, long lasting consequences. I almost fell off our couch when I heard Sanders reference both these events in his speech. This is the first time I’ve heard a US candidate for elective office mention either of these events from our recent Cold War history, and they are some of the most important for us all to understand as well as remember. See my July 2015 post, “Cautiously Optimistic About Iran and United States Relations,” for more background. Also see my January 2009 post, “Iran, Sovereignty, Colonialism and the Values of the West.”

This past weekend I purchased one of Ben Carson‘s books, to learn more about what he stands for and would offer as our next President. I’m going to read it over the holidays, but I’m definitely going to be comparing everything I read in it to what I heard from Bernie Sanders tonight.

I bought @RealBenCarson 's book "One Nation: What We Can All Do to Save America's Future" https://t.co/mzHNLPK2l8 pic.twitter.com/oBg1xR9kdB

A couple of weeks ago when my wife and I were in Miami for the Miami Device conference, we ended up spending one entire night in a hospital emergency room in Coconut Grove, and most of another night in a hospital emergency room in Fort Lauderdale. (Thankfully, her kidney stones are now “just” a painful memory.) If you hang out in any hospital emergency room in our nation for just a short time, you’ll inevitably start to think about how unfortunate it is that so many people are circumstantially encouraged to treat emergency room doctors as primary care physicians. Our medical system, pharmaceutical system, and medical insurance system in the United States is clearly broken. Status quo politicians are not going to change this. Bernie Sanders supports “universal healthcare through a single-payer system.” Bring it on. Any one of us, who is not exceptionally wealthy, is one family medical crisis away from bankruptcy and financial ruin. This is not only a crazy situation, it’s also immoral and fixable. It will not change, however, if we keep allowing insurance companies and corporate special interest groups to write our medical care legislation.

If you’re a US voter, I strongly encourage you to watch this 67 minute speech by Bernie Sanders. See how many of the essential tenets of “Democratic Socialism,” as he explains them, you agree with. From where I sit, they sound like the principles our nation needs to seriously address poverty and move forward together as a much more humane and caring society. 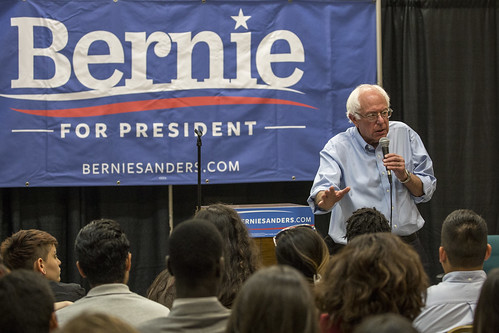