In 1978, following the release of Star Wars, Episode IV, “A New Hope” in 1977, several elementary age kids in Lubbock, Texas, re-created the Star Wars story and recorded their production using a silent “Super 8” movie camera. They created the following six minute version of the movie.

Others whose names will be added as they are remembered!

If you know the names of others who starred in this classic film, please contact Wesley Fryer via Twitter (@wfryer) or by using this contact form.

A few technical notes about this original movie (shot on silent “Super 8” film), the converted VHS version and this edited digital version.

My dad, Tom Fryer, originally shot this for us on our family “Super 8” film camera. He used a lightbulb on top of the camera for the indoor scenes, which got so hot when lit that it would give anyone immediate third degree burns if they touched it. (We never did, thankfully.)

My parents got the Super 8 film version of this movie converted to VHS about 10 years ago, using the commercial Super 8 to VHS conversion service offered by Wolfe’s Camera and Video in Topeka, Kansas. It moved with us to Oklahoma City in 2006 and has been sitting on a shelf in a living room cabinet next to an old VHS player until today. 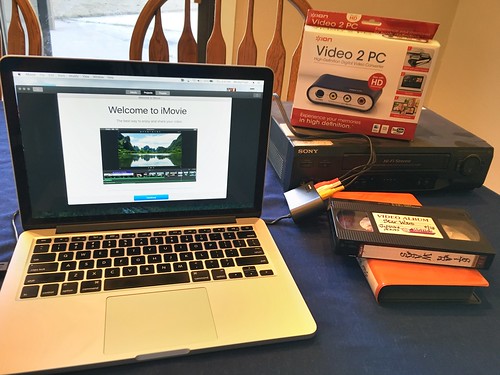 “Analog to Digital VHS Conversion“(CC BY 2.0) by  Wesley Fryer

Inspired by the release of “Star Wars: Episode VII The Force Awakens” (which I have seen three times so far, and of course love) I decided to finally make a digital version of this film. I ordered a $30 “ION Video 2 PC Analog To Digital USB Video Converter for PC” from Amazon, and used the accompanying ExCap software to import the analog VHS video to my MacBook Pro laptop. I imported it into iMovie 10.1 (for Mac OS X 10.11 “El Capitan”) and added the intro text using the “Far Far Away” Title style. Unfortunately there doesn’t appear to be a way to slow down the scroll speed, but I read about a workaround online: I created the intro title video as a separate project, exported it as a video, and then imported it into my project and slowed it down to 50% of the original playback speed. 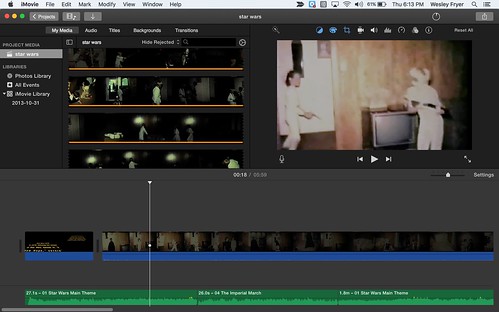 I used some of iMovie’s video adjustments to brighten the overall video a bit, since it was so dark, and imported clips from Star Wars soundtrack songs which I had in my iTunes Match / iCloud Music. Since I’m using short clips of songs and putting this together as a new “remix,” I’m hoping I won’t have this taken down by the YouTube police… but if so, I’ll file a “fair use” defense as I’ve had to do a couple times in the past.