Today at the OTA / EncycloMedia 2016 Conference in Oklahoma City, keynote speaker Shannon M. Miller (@shannonmmiller) shared a wealth of apps, websites, and project ideas in her breakout session, “Igniting Innovation and Creativity in Our Makerspaces With Digital Tools and Apps.” One of the apps she shared is “MusiQuest – Music & Beat Maker.” The same Denver-based app developer, Edify Technology (@EdifyTechnology) has also published the amazing musical creation app, “Sketch-a-Song Kids.” The tagline of this second app is, “Compose in Color.” Both of these are FREE and amazing! My wife, Shelly (@sfryer) has been playing with Sketch-a-Song tonight on her iPad, and it’s remarkable! Here are a couple tutorial videos which introduce some of the basic elements of both apps.

I wish I’d known about these apps a couple years ago when I taught a multi-week STEM unit for my 4th and 5th graders in Yukon, Oklahoma, on “The Science and Technology of Music and Sound.” That was one of my favorite original units I created that year, and the kids really loved the activities. We had 9 different learning centers, which the students rotated through, and either MusiQuest or Sketch-a-Song would have been perfect to also use in one! I used the free iPad app Beatwave as a “step sequencer” musical creation app. I still like Beatwave, but Sketch-a-Song specifically is so much more powerful and compelling for accessible musical composition! This is the 2 minute instructional video I created for my students in January 2014 for Beatwave. 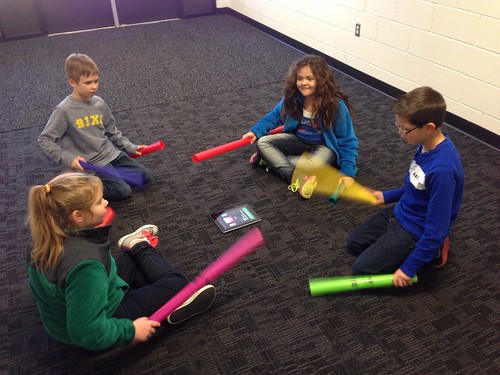 “Making a song with Boomwhackers” (CC BY 2.0) by Wesley Fryer

One of my favorite conference breakout sessions of all time was called “Bridges to Creativity,” and it was led by an Apple representative at TCEA around 1997. The computers we had “back then” were quite slow and underpowered compared to today’s iPads and iPhones, but I was totally amazed, engaged and enthralled by the creative possibilities of using MIDI software apps to create and compose. David Warlick (@dwarlick) similarly wowed me at NCCE in Seattle a few years later with his backpack-sized MIDI keyboard and laptop composition software. David’s 2011 post, “Tech for Creativity,” provides some background about how he’s been a lover and user of digital musical composition tools for years, and details his first use of the $15 iPad app, “Music Studio.”

Isn’t it amazing to think about where musical creativity comes from in the universe? Where did the notes from famous songs by Bach, Mozart, and Beethoven originate? Were these melodies and harmonies “just” inventions from their minds, or were these gifted composers able to tap into a greater consciousness and channel the musical creativity of the cosmos into human hands? Those are questions we’re not going to answer here… but we can hopefully agree that there’s tremendous value in experiencing and being exposed to outstanding examples of musical creativity.

Where is the next wellspring of musical creativity in our current age? Do you have a student in your classroom now with untapped musical potential and perhaps unacknowledged musical interest? I’m not saying you’ll have students composing like Beethoven right away (or ever) if you introduce them to apps like Sketch-a-Song or  MusiQuest, but I WILL predict with confidence that you’ll have at least a few kids who will LOVE creating and making music with them. 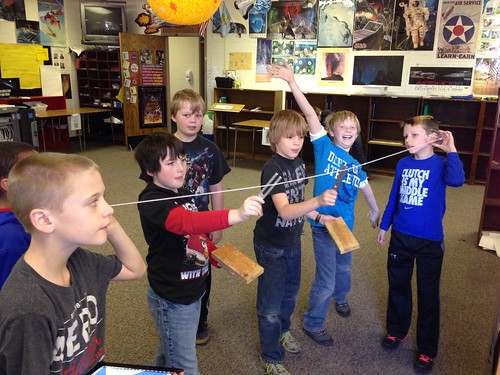 On the infrequent occasions when I’m able to attend a concert, musical, or play with members of our family, I’m often reminded of the intrinsic value of the arts. We can all benefit from opportunities to not only experience and enjoy the musical creativity of others, but also explore and develop our own senses and skills of musical creativity. Apps like Sketch-a-Song can serve as “bridges to musical creativity” for you and your students which can open an exciting and satisfying door of artistic expression.

I challenge you: Download Sketch-a-Song to your iPad and go create something today! Then share it with someone you know. If you do, please let me know via a tweet to @wfryer or a comment below.

We can all use more opportunities to be musically creative!