The website and political game project “GOP Arcade” (@GOParcade) offers telling insights into not only the issues of the 2016 election in the United States, but also the ways media and gaming can be used to influence voters and communicate serious political messages. The site features 8 bit online games (that means they have very simple graphics, think Atari 2600) which target a specific political viewpoint or dynamic from or involving the conservative right. 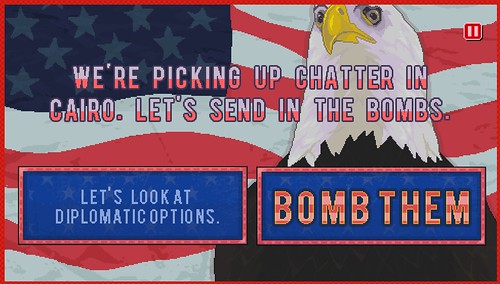 Consider the game, “Bomb the Right Place.” It’s actually a fairly challenging geography challenge, in which players are presented with the name of an international city to correctly find on a regional map so it can be bombed. Prompts, however, are written from the perspective of a national command authority which sees bombing as the only viable political option. The initial regional map players are shown includes national boundaries but not labeled country names. After guessing the location of the named city, players are shown the number of miles their guess was off and given a corresponding accuracy score for their “virtual bomb.” Players can progress through a multitude of stages, but if they ever select “Let’s Look at Diplomatic Options,” the game is over because “You made America look weak.” 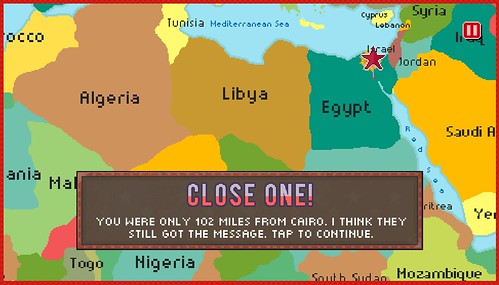 The Atlantic reported in March 2016 that the number of civilians killed by U.S. drone strikes in the past eight years is significant:

The notion that the Obama Administration has carried out drone strikes only when there is “near-certainty of no collateral damage” is easily disproved propaganda. America hasn’t killed a handful of innocents or a few dozen in the last 8 years. Credible, independent attempts to determine how many civilians the Obama administration has killed arrived at numbers in the hundreds or low thousands. And there is good reason to believe that they undercount the civilians killed.

That article and these statistics are not linked from the GOP Arcade website, but questions like this (“How many civilians have U.S. drone strikes killed since President Obama took office?”) are exactly the kinds of questions GOP Arcade developers are hoping young voters will ask and pursue as a result of their interaction with and exposure to the site’s games.

Beware that, just as we’ve seen in the U.S. Presidential debates and election discussion, the actual content of these games can be perceived as inappropriate and offensive. In “TRUMP TOSS” players are challenged to “Fling Mexicans over a wall and make America great again!” In “SCIENCE FIGHTER” players are encouraged to “Kill scientists! Collect campaign contributions!” Another game (which I won’t link here) was recently posted to the developer’s Twitter channel and has a separate domain, and references sexual harassment allegation controversies teachers are likely to NOT want to bring up in class. This is the landscape of our current election season, however, and it’s both humorous as well as troubling to consider the issues GOP Arcade raises.

Thanks to Andrew Watts (@thatswattsup) for highlighting GOP Arcade in his October 24, 2016, article for Backchannel, “The News Is Now Literally a Video Game.” (@backchnnl) Read the article for more insights from GOP Arcade co-founder Chris Baker about why his team created the site and what they want to accomplish with it. According to Chris:

Our ultimate goal with the GOP Arcade was to create a gaming platform that simultaneously existed as op-ed commentary and as an education to people about the important issues in the election.

This reminds me of studies in 2014 which examined the percentage of U.S. adults who get most of their news from Comedy Central shows “The Daily Show” and “The Colbert Report.” The age of universally recognized and trusted network news anchors is over. The age of a fractured media and information landscape has dawned and is quickly accelerating.

If you’re a classroom teacher, as you likely want to do with every issue of this election season, carefully consider whether you want to introduce your students to “GOP Arcade” or not. In addition to the political messages and perspectives which will be natural to discuss as a result, it could also be worthwhile to consider the effectiveness of the “gamified cognitive dissonance” approach which GOP Arcade takes to some of the important issues of our day like pharmaceutical price regulation (“EPIPEN TYCOON“) or gun control (“GOOD GUY WITH A GUN.”)

Personally, I admire the creative way GOP Arcade is highlighting important issues which we should, as voters, confront and discuss. Games for Change (@g4c) seeks to harness the power of games for similar educational purposes, although in perhaps less controversial or contentious arenas.

If you share “GOP Arcade” with your students or others, I’d be interested to know what kinds of conversations and discussions the exposure or encounter sparked. Please let me know with a comment below or by reaching out on Twitter to me @wfryer.