Visualize Tweets on a Map with Avian for AppleTV

If you have a 4th Generation AppleTV, you can use the free app Avian for Twitter to visualize tweets on a dynamically changing and zooming map. This is an engaging way to follow live tweets for a specific hashtag, like during a Twitter chat, or for a specific user or hashtag(s) you like to follow. You can even add multiple userIDs or hashtags. If you use this in your classroom, keep in mind that tweets will NOT be filtered or censored, so it’s a good idea to avoid popular hashtags used outside of educational circles. In this post, I’ll highlight how to use Avian for Twitter on AppleTV to follow a single hashtag. 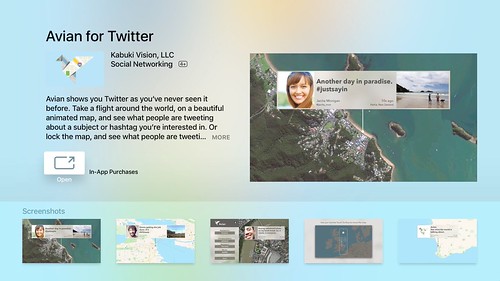 First, you need to download and install the Avian for Twitter app on your AppleTV. If you have an older AppleTV (3rd generation or previous) you do NOT have access to the AppleTV app store, so you won’t be able to use Avian for Twitter. An in-app purchase is available to limit the geographic area shown on the globe, but it’s not required to use the app.

When you first open the app on AppleTV, you will see a shortened web link (bit.ly) which you need to enter into a web browser using a computer, tablet or smartphone. To save time, use a browser which you already use for Twitter, so you’ll be logged in. You’ll be prompted to authorize Avian for Twitter to use your account, and then be shown an access code. Enter this access code on your AppleTV, and then the app will be enabled for use.

Next, you need to customize the settings for Avian using your AppleTV remote. Since you’ll be typing a hashtag, it’s handy to use the iPhone Remote app to control the AppleTV since you can type on its keyboard. In the AppleTV screenshot below, I entered the Twitter hashtag “gafesummit.” Avian works whether or not you add the # before the hashtag. It appears to only display LIVE tweets, however, and unlike some other “Twitter wall visualizers” does not appear to recycle through tweets or pick up past / most popular tweets. I also customized my view for the “satellite” map style. Unless you pay for the in-app upgrade, you can’t limit the geographic area for displayed tweets. 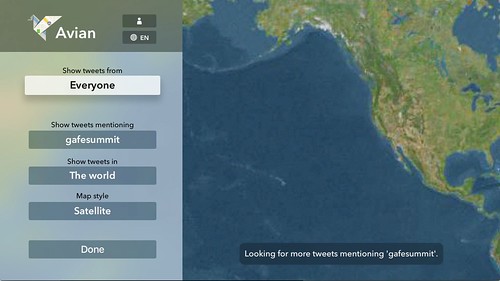 I recorded a three minute sequence of Avian visualized tweets directly on AppleTV this evening during the Twitter chat for #EdTechAfterDark. (Mondays at 10 pm Eastern) This video will show you exactly what the Avian for Twitter app on AppleTV can look like!

This post documents first the time I’ve directly captured screenshots and videos from an AppleTV. If you’re interested, here was my workflow:

If you give Avian for Twitter a try and find this post useful, please let me know with a comment below or by tweeting me @wfryer.