Last night following our weekly EdTech Situation Room webshow and this evening, I watched the 2 hour Google I/O 2017 conference keynote on YouTube. There were lots of exciting announcements during the keynote, but in this post I want to share and comment on the introductory video. I used SafeShare.tv to create a trimmed clip of this video, which is the “story of an idea.” It’s a sophisticated animated sketchnote of a character that looks a bit like Ziggy, and his “idea” that becomes a walking, golden egg with feet and hands. In the short film they go on an adventure together, overcoming adversity, having fun, and ultimately launching into our enormous and gorgeous universe. It’s very well done. 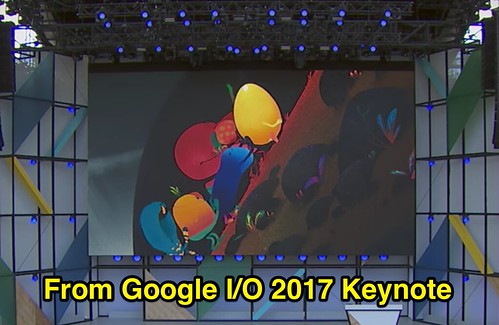 Here’s an embedded version of the video which isn’t entirely cropped, but does start at the beginning of the animation sequence, 46 seconds into the video. I created this embedded version for free with vtubetools.com.

As a technical aside, YouTube provides the option to create a video link which starts at a specific time, but not embed code which starts before the original video’s beginning. For that you need to use a tool like SafeShare.tv, vtubetools.com, or TubeChop.

This video captures some of the spirit of Google developers and (I assume from the keynote) the themes of the conference: creativity, persistence, and a commitment to use (and the belief in the potential to use) code to make the world a better place. Consider sharing this video clip with your own students, and then perhaps discuss what themes they see in this creative vision. Here are a few questions to get your started:

I used Shazam on my iPhone to identify the background song for this animated video as “Alright, Alright, Alright” by Jerry Mungo. Here’s a 1973 version of the song shared on YouTube.

Here’s the original video clip of the 2 hour keynote. I recommend you add it to your “Watch Later” YouTube playlist. If you use one of the chopped / cropped versions of the keynote’s video introduction and talk about it with your students, please let me know with a comment below or by reading out to me on Twitter at @wfryer. Never underestimate the value of inspiring young minds with the power and potential to change the world for good!

Access all my “STEM Curiosity Links” on stem.wesfryer.com/home/curiosity. These are short video clips or articles I’ve shared with students in STEM class to inspire their imaginations and curiosity.