Today Shelly and I spent 2 1/2 hours at Northeast Academy in Oklahoma City Public Schools, attending an OKCPS sponsored information event for parents, students and families. On January 22, 2019, OKCPS district officials presented the “Pathway to Greatness” proposal at the monthly board meeting, which includes 3 different options for closing, consolidating, and relocating multiple schools in the district. As a point of reference, OKCPS currently serves 46,000 students and after these proposed closures, I think the number of campuses would be 86. It’s a large, urban school district, and our largest in Oklahoma, with tons of challenges. See my post from last night, “Killing Classen SAS in Oklahoma City Public Schools,” for more background and opinions about these proposals, and particularly how they are likely to impact Classen School of Advanced Studies.

“OKCPS Pathway to Greatness Logo” (CC BY 2.0) by Wesley Fryer

While there are some differences in options A, B and C of the “pathway,” all of them include splitting ClassenSAS’s current and historic “mid-high” model, and over a period of years seeking to double the enrollment at both ClassenSAS Middle School (located in the current ClassenSAS building) and at the new ClassenSAS high school, in the current Northeast Academy building. I live-tweeted the informational meeting today, and archived those tweets in a “twitter moment” I’m embedding below. Before including those observations and comments, I’ll summarize my takeaways, perceptions and recommended advocacy steps for those of us concerned about ClassenSAS, its students and families:

I want to place faith in our elected OKCPS leaders, their abilities and willingness to both listen to and respond to constituents, and their collective drive to make decisions which best meet the needs of our community. I’m hopeful in upcoming days and weeks to have opportunities for further face-to-face dialog with others in our community about these proposals, including some board members who I have and will contact directly.

I will close with a quick story before embedding the tweets I shared at today’s information meeting. I had an opportunity to visit and present at a conference in Cairo, Egypt, in November 2017. I not only learned a lot of important things traveling to Egypt, I also had sustained opportunities to reflect on ideals like democracy, responsive government, freedom of expression, and the Arab Spring. I visited and walked in Tahrir Square, and talked with Egyptians who had participated in the Arab Spring protests there in 2011… rendering aid to those who were beaten, shot, and abused in other ways by the security forces of Hosni Mubarak. 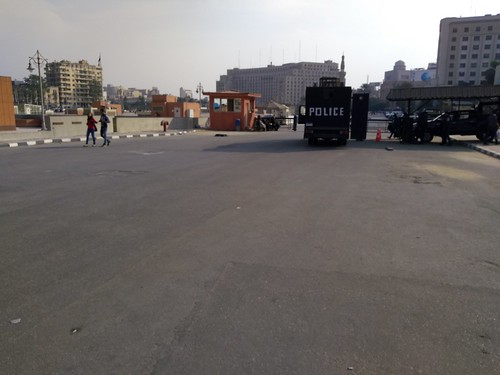 Why do I mention these things in the context of proposed changes to our public schools in Oklahoma City? The reason is that the tools for communication and organizing which we have right now to use and put to work in the United States, mainly via social media, are unprecedented in human history. Without Facebook and Twitter, Egypt would not have had a revolution in 2011. The outcome of that revolution, I would argue today, has not been wonderful for human rights, democracy, and freedom of expression in the short term… but I both hope and pray (and predict) the last chapter in that story has not been written.

For us today, facing proposed changes in a very democratic and ostensibly open political process like our public school system in Oklahoma… We each have opportunities as well as choices to make about how we engage with our elected officials, school officials, and each other regarding these proposals. Has “the train left the station” for OKCPS when it comes to the “Pathway to Greatness” proposals? Will district educators be forced to break the incredibly successful ClassenSAS school into two parts, and move the high school into another building without any prior investment in faculty, facilities, or resources? I don’t know. After today’s meeting, my perception of this answer is sadly, yes.

But that is not the way representative government and democracy has to work, and arguably should work, in the United States of America in 2019. If you are an Oklahoma City taxpayer, if you are a parent, guardian or grandparent of a child in Oklahoma City Public Schools, then you have both a right and a responsibility to speak into these proposals and decisions.

Contact our OKCPS Board Members and let them know what you think. They were elected to do many things, but one of the most basic is to LISTEN TO CONSTITUENTS. If we remain silent while our elected officials take drastic actions that may potentially break / irreparably damage the most successful school in our entire city (ClassenSAS), then we will have ourselves to blame.

Let your voice be heard. And may our elected officials listen to the people.

ClassenSAS is an incredible school and a powerful school model which deserves to be thoughtfully and carefully replicated, not rashly broken into pieces without committed investment.

Together, let’s save ClassenSAS from destruction.