I’m attending the “Summer Institute in Digital Literacy” (#digiURI) this week in Providence, Rhode Island. Although my flight landed too late for me to make the official opening session, thanks to Troy Hicks (@hickstro) I connected for supper with a great group of attendees and had wonderful conversations. Among many other things, we talked a little about our favorite podcasts and touched on some issues about disinformation, propaganda, and Russian interference in the 2016 U.S. elections. The Raw Data Podcast (@rawdatapodcast) was mentioned, and their recent 3 part series on Russian disinformation, including the superb, June 20th episode “Dezinformatsiya.” It features an interview with former U.S. Ambassador to Russia, Michael McFaul (@McFaul). Thanks to Brian Turnbaugh (@wegotwits) for sharing this!

I’ve added Ambassador McFaul’s recently published book, “From Cold War to Hot Peace: An American Ambassador in Putin’s Russia,” to my running Twitter list of books I hope to read someday. As I’ve mentioned on “The EdTech Situation Room” podcast (@edtechSR) multiple times, I’m convinced our 2020 U.S. elections are going to be even WORSE in terms of the roles disinformation, propaganda and digital obsfucation will play.

Disinformation and “digital polarization” were two important themes in the April 2019 workshop I led at the ATLIS Conference titled, “Filtering the ExoFlood: Strategies for Media and Information Literacy.” In particular, I invited participants to discuss online disinformation campaigns using Destin’s (@smartereveryday) fantastic YouTube episode, “Manipulating the YouTube Algorithm” from March 2019.

During this week at the Digital Literacy / Media Literacy Institute, I’ll be working on some kind of project which ties to student lessons or professional development. I’m thinking about doing something which relates to better understanding the ways social media platforms are being manipulated today to serve malicious political purposes which seek to harm the cause of free and fair elections in the United States. Arguably, these methods and activities pose an existential threat to liberal democracy. That was the argument of Carole Cadwalladr (@carolecadwalla), in her April 2019 TEDtalk, “Facebook’s role in Brexit — and the threat to democracy.” If you haven’t watched this 15 minute video yet, either watch it now or add it to your “Watch Later” YouTube playlist.

I’ve started a Google Doc (shortened link: wfryer.me/disinfo) with some of these resources. I’m thinking tonight it could be powerful to use the video annotation tool VideoAnt to identify and share key ideas from these videos, specifically relating to political disinformation. I’m looking forward to attending Renee Hobbs (@reneehobbs) session tomorrow on using VideoAnt.

It’s going to be a great week of learning about media literacy here in Rhode Island! If you want to follow along with participants, check out the #digiURI hashtag this week! I’m sure I’ll be posting more on my blog as well as on Twitter as the learning continues. 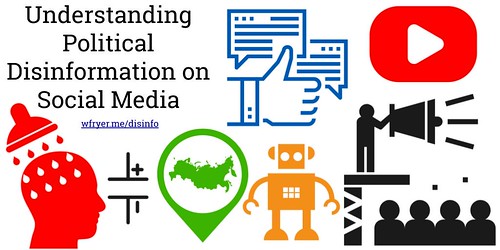