Living as we do amidst an overwhelming quantity of digital information, each one of us needs to develop better skills for filtering our feeds. We also need to use tools and workflows which help us readily FIND STUFF LATER. We’ve all likely had this experience: Someone shares an interesting website with us, or we stumble upon a link we like and want to come back to later. But WHERE do we save it? Putting all your web links into a personal saved browser archive works but those collections quickly become unwieldy, and because they can’t be ‘tagged” the way social bookmarks can (like Diigo) they are not very sharable, readily searchable or flexible. I used del.icio.us and then Diigo from 2008 to 2015, but eventually abandoned both for Twitter. Twitter not only offers “Twitter Moments” for organizing and sharing collections of links, it also supports the use of “threads.” I know many educators (including Carl Hooker @mrhooker) love using Wakelet in a similar way, to collect not only Tweets but also links about a common topic.

I like Wakelet but I’m still devoted to Twitter for my information trapping. (The burn of Storify’s demise as a third party platform archiving tweets still pains me.) In this post, I’ll share several different techniques to use Twitter threads to SAVE LINKS and FIND THEM LATER. 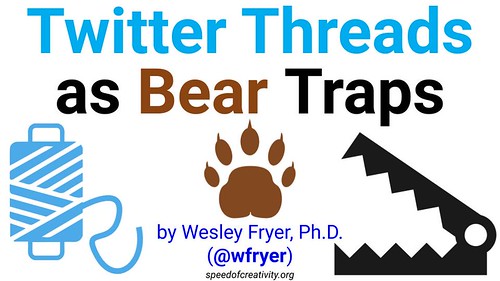 “Twitter Threads as Bear Traps” (CC BY 2.0) by Wesley Fryer

So what’s up with the “bear trap” reference in this blog post’s title? This post is inspired by Jason Neiffer’s (@techsavvyteach) 2011 presentation, “Capture: Setting Up Traps to Organize Mountains of Information.” I like metaphors, and the idea of “trapping information” so you can find it later resonates with me.

Twitter threads provide a great way to share a collection of related thoughts with others on Twitter, which can be readily viewed in order / as a stream. Here is an example of a six part Twitter #rant I shared back in September 2019, articulating my strong opinions about parents and journalists who question whether or not students should have smartphones at all in high school. When you view the direct link to the tweet, you can scroll through the additional five tweets in the series.

As I’ve been reading Peter Singer and Emerson Brooking’s outstanding 2018 book, “LikeWar: The Weaponization of Social Media,” I have been threading notable quotations from my iPad Kindle app “underneath” this tweet I shared this summer on July 18th. This way, if anyone views an individual tweet in this series and wants to, they can click the direct date/time stamp for that tweet and then scroll back through the past, related history. And I can do this too! As of this writing on September 6, 2020, there are 31 tweets in that specific “thread.”

In 2012 I setup “Tweet Nest” as a personal information trap for my Tweets, and I regularly refer to my personal installation of Tweet Nest (twitter.wesfryer.com) to find links I’ve shared in the past. (Sadly, the Tweet Nest project is no longer maintained / being updated.) For quite awhile I liked to blog notes for professional development conference sessions I attended, but as Twitter and conference hashtags became more popular, saving and sharing my “session takeaways” via Twitter became preferable for me as an acknowledged #edtech over-sharer.

In the summer of 2019, I used “Twitter Moments” to aggregate tweets from the “Summer Institute in Digital Literacy,” which I attended in-person in Providence, Rhode Island. Afterwards, I wrote a blog post and recorded a podcast to both synthesize many of those ideas as well as further amplify and archive them, for myself and others. This year, the summer institute was virtual:

The 8th Annual Summer Institute in Digital Literacy was offered fully-online July 19 – 24, 2020. More than 150 K-12 educators, librarians, and college faculty participated in this exciting initiative, coming from 30 states and 6 countries across 7 time zones.

Rather than collect Tweets in separate “moments,” or create a traditional Twitter thread by replying to my most recent tweet for the conference, I replied throughout the week-long conference to my own initial Tweet. By doing this, I aggregated the 170+ tweets I shared and others interacted under in a single tweet. When you view that tweet, you can scroll through my personal history of learning from the conference. This isn’t technically “a Twitter thread,” because each successive tweet wasn’t a response to another single tweet… But I still consider it a “thread” because it’s a bundle / aggregation of tweets. Helpfully, it does NOT rely on a third-party service which could go offline, like Storify did in 2018. This thread of collected ideas and links is “just on Twitter.” Since all of the tweets in the ‘almost-thread’ series are responses to the same one, THAT tweet shows the large number of responses as a visual cue to others that, “there is a lot more conversation here underneath this tweet.”

Those are the ways I’m using Twitter these days as an information trap, “like a bear trap.” Have you used Twitter threads, either for a longer series of ideas (beyond the 280 character limit) or specifically for professional development as an educator? If so I’d love to hear about your experiences either (of course) on Twitter or as a comment below.