Transliteracy is the New Language Arts

This is a wonderful definition of “transliteracy” from The Transliteracy Research Group:

Transliteracy is the ability to read, write and interact across a range of platforms, tools and media from signing and orality through handwriting, print, TV, radio and film, to digital social networks.

I’ve heard of and read about transliteracy a bit in the past, but I need to learn more about it since this is a paraphrase of my advocacy rationale for the digital literacy framework, “Show What You Know with Media: What Do You Want to CREATE Today?” * 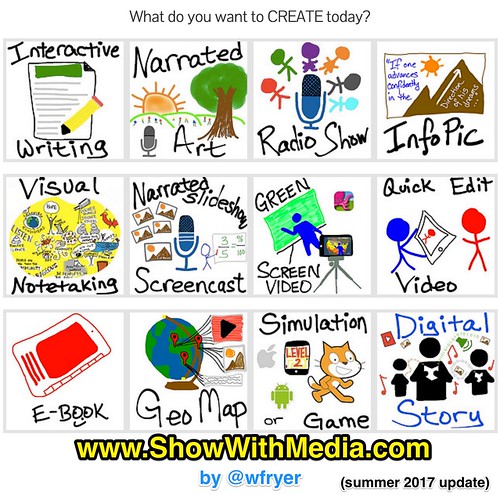 “Show With Media Project Options” (CC BY 2.0) by Wesley Fryer

Thanks to a tweet yesterday from Joyce Valenza, I found this video of Sue Thomas‘ lecture on Transliteracy at Empire State College on March 15th. Check it out.

Transliteracy is the new “language arts” in our schools. We live in a “media-centric society” (as Roger Wagner, founder of HyperStudio, said years ago) and the implications of that statement are barely understood by many parents as well as educators today. Leaders in our schools and statehouses know technology is changing lots of things, but few understand LITERACY itself is changing. I heard David Warlick proclaim “Literacy Isn’t What It Used to Be” at NECC 2003 in Seattle, and that idea continues to resonate with me a decade later. Although I didn’t use that term, advocacy for transliteracy was a key part of the presentation “Why Play with Media?” I shared in Yarmouth, Maine, in March 2012. We need to play with media and TEACH multimedia communication because literacy is shifting to become “transliteracy.”

Why Play With Media? from Wesley Fryer

Just this past weekend we had a “transliteracy moment” in our family. Our middle daughter said two students had been kidnapped at her school, and my wife asked her where she heard that. She replied it was posted on Instagram by a friend. Did she verify if any other sources were reporting this headline? Was she critically thinking not only about the source of the information, but also the tools at her disposal (i.e. Google) to verify information? What is her responsibility as an Instagram user, and therefore an information PUBLISHER and disseminator, to verify the accuracy of information before she passes it along to others? These are very relevant, timely, and important conversations, and unfortunately in many school language arts classes students are still reading and discussing a paper-based version of “The Scarlet Letter” like it was 1981. It’s not 1981, or 1961, or 1850, the year Nathaniel Hawthorne published “The Scarlet Letter.”

If you want to read, study and discuss “The Scarlet Letter” today, the good news is it’s available free via Project Gutenburg. That means as a teacher you can import it in ePUB format directly into the free SubText app on the iPad, and have “discussions in the book” with your students which include hyperlinks, images and embedded videos. Then your students can engage in “interactive writing” on your class blog (which serves as their “digital portfolio,”) can create “narrated art” about the concepts and ideas of the book, and can even construct their own eBooks with digital text, images, audio and video. THAT could potentially be a great transliteracy study. SubText is the eReading app we’re using in my Spring “Mapping Media to the Common Core Vol I” course in Montana.

Who will help “normalize” discussions about and work in transliteracy in your school or college? If not you, then who? As David Jakes wrote eloquently tonight, we need more intentional opportunities in our schools for “practices found on the edge” (like those of transliteracy educators) to influence and ultimately “win over” teachers in “the core.” Jakes wrote:

Would your school climate benefit from the creation of more disruptive edges? Would that promote a change in climate where the conditions for innovation became more favorable? What if educators were intentional and strategic about creating edges? How would this contribute to a climate, and ultimately, a culture of innovation? And, how would the practices found on the edge ultimately inform the core?

Share this idea with another teacher you know this week: Transliteracy is the New Language Arts.

* Previously I called this digital literacy framework, “Mapping Media to the Common Core.” These project resources, which continue to be updated, are available on showwithmedia.com.

One Response to Transliteracy is the New Language Arts