Sadly, against the overwhelming consensus of the scientific community, our Oklahoma Senator Jim Inhofe continues to believe and argue that climate change is a liberal conspiracy concocted to trick US voters. This position is false and ridiculous. Last week on the floor of the U.S. Senate, Rhode Island Senator Sheldon Whitehouse responded to Senator Inhofe’s embarrassing arguments about climate change. The following CSPAN video is seven minutes long and a very articulate rebuttal.

I understand a committee of Oklahoma educators convened by the Oklahoma State Department of Education last year recommended removal of references from the “Next-Generation Science Standards” to both climate change and evolution, because of the perception that Oklahoma voters would not support the teaching of these ideas in our public schools. With the repeal of Common Core State Standards in June (which do not include science) a great deal of confusion has ensued over Oklahoma academic standards. I am very interested to see what directives my own school district will provide to teachers regarding academic standards when we return to school in a little over a week.

Just as it was ignorant and silly (as well as tragic) for the Catholic Church to persecute and confine Galileo when he postulated the sun was the center of our solar system in the early 1600s, it is similarly ridiculous for Oklahoma elected representatives to refute the consensus of the scientific community with regard to climate change and evolution today.

As discussions over academic standards in our state move forward in upcoming months, hopefully more informed heads will prevail and we can fully adopt the Next-Generation Science Standards without silly amendments.

In addition, I hope Senator Inhofe’s “reign of error” will draw to a close sooner rather than later, and we can elect a senator to replace him who will not be as ideologically tied to the oil and gas industry. For specific details, I encourage you to look at the public record statistics compiled by the Sunlight Foundation about donors to the political campaigns of Jim Inhofe. I have met Jim Inhofe personally and think he is a nice guy, but he is tragically misinformed and misdirected when it comes to some of the most important scientific issues of our day like climate change. 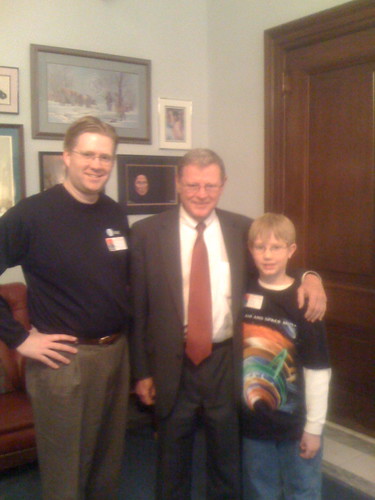 This situation with Senator Whitehouse responding to Senator Inhofe on the floor of the U.S. Senate is a case study in how I WISH our Congress worked and functioned. Senators SHOULD listen to each other and be willing to reconsider their opinions and positions based on the ideas and evidence presented by colleagues. It would be wonderful, and an act of inspiring enlightenment, if Senator Inhofe would reconsider and change his views on climate change. Given his record of book publishing as well as campaign finance / contributors, however, that outcome seems extremely unlikely.

Please Senator Inhofe, listen carefully to the reasonable words of your colleague, Senator Whitehouse, and acknowledge the reality of climate change. Yes, I know the oil and gas industry is very important to our state, and those working in the fossil fuel industry do not want us to broadly transition away from oil and gas for energy production. That transition will happen eventually as new technologies make alternative fuel options viable, but we do NOT need our elected leaders to intentionally obstruct that transition in the ways you attempt to do by denying the reality of climate change. On a personal level, you should know that your stand on climate change turns younger and middle aged Oklahoma voters like me against you when we go to the polls.

It’s not too late to change your view and position on climate change.

Hat tip to Addicting Info for sharing this video link.