Interactive writing should be a cornerstone of literacy development and assessment in elementary and secondary schools, but in 2014 it remains a rare activity in most K-12 schools in the United States. Interactive digital writing involves the production and sharing of electronic texts which (in most cases) can be readily conveyed (transmitted), copied, connected (hyperlinked), commented on, and collaboratively constructed. While some teachers use “walled garden” interactive writing platforms which require passwords for access, the most powerful and beneficial platforms for interactive writing are public websites on which submitted content (posts and comments) are moderated by teachers and other adults. Ideally, every teacher and student in K-12 schools should have and use a moderated, interactive class blog, which permits students to submit posts, is openly accessible online (does not require a password to view), and permits visitors to submit comments which are moderated by teachers. (Source: Mapping Media to the Curriculum, “Interactive Writing” chapter, 2013.)

In October of 2014, teachers at Independence Elementary in Yukon, Oklahoma, conducted an electronic student survey to obtain baseline data about student experiences with interactive digital writing. The primary catalyst for this specific survey was an application for the University of Oklahoma K-20 Center’s OETT “Phase 1” Grant for Educational Technology. These are the summarized results from the survey.

Of the 600 enrolled 4th and 5th graders at Independence Elementary School (IES), 580 participated in this survey. Students used iPads in STEM and Art class to respond to the survey the week of October 20, 2014. During the 2013-14 and 2014-15 school years, the IES STEM teacher created separate, KidBlog websites for each class at IES. KidBlog is a blogging platform designed for classroom teacher and student use, based on the open source content management system, WordPress. Free and paid versions of KidBlog are available. IES classes in 2013-14 and 2014-15 used free versions of KidBlog for classroom interactive digital writing.

Approximately half of the students at IES (12 classes) were enrolled in STEM for the fall semester, and approximately half (12 classes) were enrolled in Art. All students in STEM classes received instruction and were given assignments to post to their class KidBlog websites during the fall term in weeks preceding the survey. Students enrolled in Art class did not receive instruction or assignments to post to KidBlog, unless their classroom teacher provided those directives independently. To the best knowledge of the investigators, only four of twenty-four total “regular” classroom teachers at IES used KidBlog websites for interactive digital writing in their classrooms in the fall of 2014.

Of the 580 students responding to this survey, 298 were in fourth grade and 282 were in fifth grade. 280 students, or 48.3%, reported they had posted to  their class KidBlog at least once during the semester. This result was expected and unremarkable, since all students enrolled in STEM in the fall (approximately 50% of all students) received instruction and assignments to post to KidBlog. 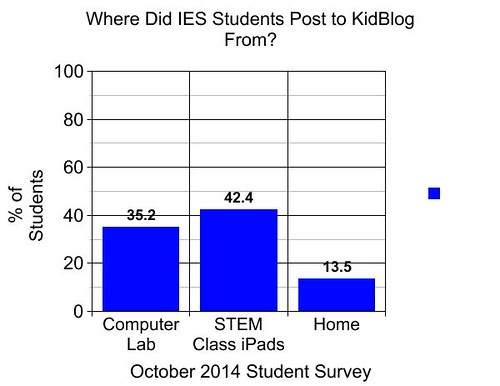 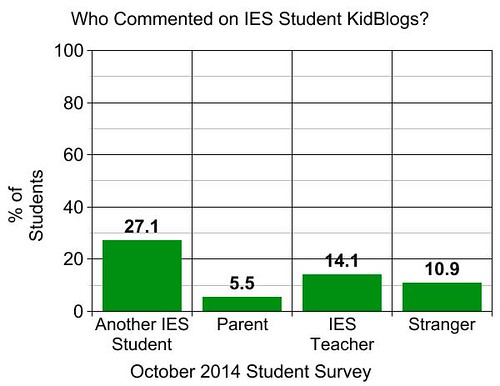 In fall 2014, parents, community members, and others were primarily notified about student posts to classroom blogs via the IES school Twitter account (@iesYukon) which is configured to automatically cross-post to the official school Facebook page. In addition, some student blog posts were shared on the IES STEM classroom Twitter account (@iesSTEM) and the STEM teacher’s Twitter account (@wfryer). One afternoon workshop / professional development session was offered to IES teachers in fall 2014 on interactive digital writing and the use of KidBlog. That optional, after-school workshop was attended by approximately four of the forty teachers and staff at IES.  The IES school librarian started introducing students and teachers attending scheduled “library time” to KidBlog in late 2014. While interactive digital writing was introduced to students in STEM classes, library classes, and utilized by a handful of classroom teachers at IES independently, the vast majority of IES classroom teachers did not utilize KidBlog websites or other websites for student interactive writing in fall 2014.

The results of this survey will be used as baseline data to assess the impact of anticipated “interactive writing” professional development and (hopefully) an expanded iPad digital learning initiative at Independence Elementary in 2015. A copy of the October 2014 Google Form used for this student survey is publicly shared under a Creative Commons Attribution license. (This means anyone is free to use that form freely, with attribution to teachers at Independence Elementary.) Since that form is publicly editable, investigators recommend comparing it to the archived PDF version of the student survey to ensure changes have not been made from the original, if others want to replicate this survey. This survey has not been formally evaluated for validity or reliability.

This article is also available in the Publications Archive of Wesley A. Fryer, Ph.D.