This weekend our family finally made the jump to upgrade our home wifi router. For the past three years, we’ve been using a second generation AirPort Extreme wifi router which I stumbled upon at a local pawn shop. Prior to that time, we’d just used “el cheapo” Linksys (now Belkin, formerly Cisco) and Netgear routers of the $40 variety which I’d bought at WalMart. Since members of our family literally live large portions of our lives connected to the Internet, it’s very important that we have fast, reliable and robust home connectivity. The move from a 2nd Gen AirPort Extreme (released in 2007) to the 6th Gen Airport Time Capsule (released in 2013) turns out to be a HUGE jump in wireless capability. Apple advertises on their website that the newest Airport Extreme / Airport Time Capsule offers “up to 3 times faster wifi.” Whether that turns out to be true depends on the type of wifi card and antenna in your wireless device(s). Since the AirPort Extreme will set you back $200 and an Airport Time Capsule costs $300 for the 2 TB version or $400 for the 3 TB version, you might wonder if it’s worth the cost when you can pick up a cheap wifi router for around $50. I’m still hanging on to an older Netgear wifi router to use for PD videoconferencing, which supports a DMZ mode that Apple routers don’t, but I’m totally convinced that for our family needs and wifi usage profiles, the Apple wifi router is worth the money. In this post I’ll explain why.

My sister and her family stayed with us for part of this weekend, and last night we had a combined 17 (SEVENTEEN) wireless devices connected to our home wifi network. This may sound incredible for nine people, but I bet it’s not totally an outlier statistic in our day in age over the Christmas holidays. In February 2014 Strategy Analytics reported globally, wifi households have 7 connected devices now and will have 11 by 2017. Gartner predicted in a September 2014 study that by 2022, because of “connected devices” (the Internet of Things – IoT) a typical home could have 500 devices connected online. You can see in the list of wireless clients from last night in the screenshot of my AirPort Utility app that we have fun naming our devices after favorite movie characters from Lord of the Rings, Harry Potter, Star Wars, Brave, etc. If you can tell me about Vilya without looking it up online you deserve a special star. 🙂 See Cisco’s infographic about the IoT for more statistics about this. 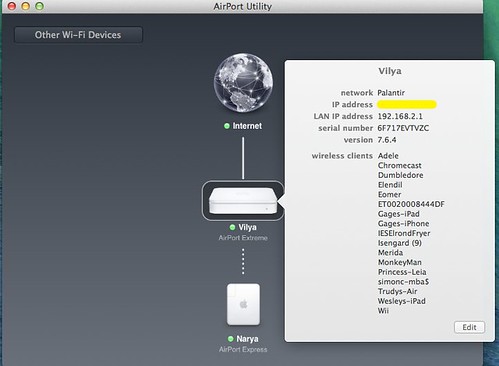 Since my sister and family live in a part of Kansas City which has Google Fiber availability and they recently got it installed, their home bandwidth to the “commodity Internet” is absolutely incredible. We can’t touch their connectivity speeds here in Oklahoma City at this point. My brother-in-law uses both Apple and Windows-based computers at home and work, and he helped me use the built-in “Network Utility” app on my MacBook Air to view my actual connection speed to our home wifi router. Prior to our upgrade, using the 2nd Gen Airport Extreme, that speed was “just” 144 Mbit/sec. 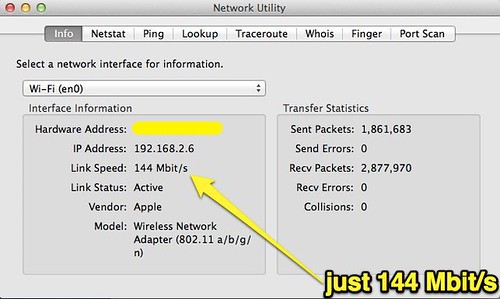 After upgrading to the new 6th Gen/latest Airport Extreme / Time Capsule wifi router, my 2011 MacBook Air connects at twice the speed: 300 Mbit/s. If I was using a newer MacBook Air, like my brother in law, that link speed would jump to an incredible 1 Gbit/s. 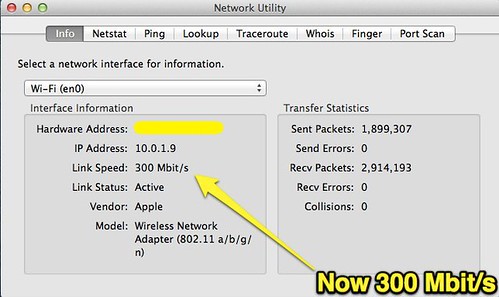 That’s much faster than our commodity Internet connection speed, even with our DOCSIS 3.0 cable modem upgrade last month, but would be especially noticeable when backing up files over wifi to the Time Capsule. My backup of about 30 GB of files today on the new wifi router took about 30 minutes. I’m guessing the transfer time would have been less than 10 minutes with a new Apple laptop with a newer/faster wifi card and antenna.

Our new Airport Time Capsule not only supports faster wifi and Internet connectivity speeds for everyone’s devices, it also has a much stronger signal strength. That means we don’t need to use a separate Apple Airport Express to provide wifi coverage in our entire house. That was one of the reasons I was thrilled to start using an Apple wifi router three years ago: It’s a cinch to “extend” your wifi network with another Apple device. I tried unsuccessfully to do that with other vendor wifi access points, and never got them to work. You pay more for Apple wifi products, but the benefits are huge in terms of ease-of-setup and ease-of-use. 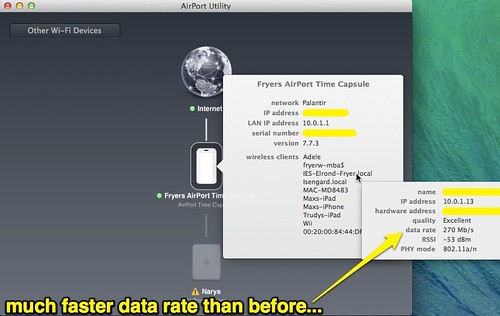 The final reason a new Apple Time Capsule wifi router is the best home wireless connectivity solution for our family is Time Machine software. Again my brother-in-law’s advice and experiences were influential on me. I’m embarrassed to say I have NOT been “good” about backing up my laptop data and other data our family uses “to the cloud” in the past few years, and I know I need to do this. A few years ago I tried to do a backup using Carbonite, but I could never get a full backup to complete. (It kept timing out due to how much data we needed to backup, and probably our slower home wifi setup and ISP’s upload speed limits.) Over the years I’ve also dabbled with remote backups using Jungle Disk (saving to Amazon S3) as well as SpiderOak. All of these options were recommended by different tech podcasters I’ve listened to over the years. I never got any of them setup to regularly run/update. Since our family doesn’t use ANY Windows-based computers (we’re all Apple & Chrome users now) Apple’s Time Machine software and Time Capsule hardware will take care of automated, local backups of our data. I still need to backup data off-site for fire and tornado protection (which I do in a bank safety deposit box) but this new setup is going to mean MUCH more frequent backups of our data. That’s a very good thing.

Another detail I’ll share about this setup and change regards Internet content filtering. Since 2008, we’ve used OpenDNS to provide a basic level of content filtering on our home network. I first saw and learned about OpenDNS at our local Apple Store. It’s a fantastic solution, since it works at the router level and therefore configures ALL wireless devices (by default) connecting online through your home network. I’ve written a number of posts through the years discussing and highlighting OpenDNS. See my most recent from January 2014, “Free Home Internet Filtering option (OpenDNS)” for more details. 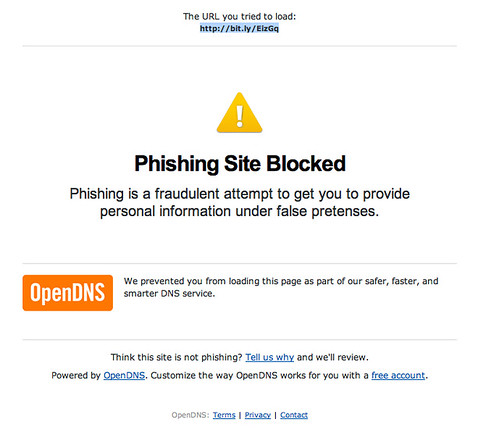 If you’ve read to the end of this post and you’re not convinced that an Apple Airport Extreme wifi router will suit your home networking needs well, I encourage you to at least consider an upgrade of some kind to your home wifi access point if it’s very old. Also be sure you have good wifi security enabled on your access point. As this December 2014 article in “The Register” points out, lax wifi security in many homes today resembles lax PC security in the 1990s. Hacks and attempted hacks are going to continue to grow in number in the months and years ahead, and the security measures we take to protect ourselves, our families and our businesses/schools/organizations will only grow in importance. Be proactive, take steps to stay safe and secure, and find ways to provide FASTER, more reliable Internet connectivity at home for everyone (to whom you give security credentials) to enjoy!