This evening I ordered the “Z-Bolt Extreme Temp Green Laser (14° ~122°F – Constant On/Off)” online for $108. I based this purchase primarily off this 2006 review of another Z-Bolt astronomy laser, the recent article for Sky and Telescope, “Some Pointers on Using Laser Pointers,” and some other online reviews which recommended getting a laser which works in colder temperatures. I’m not planning on super-cold winter astronomy outings, but you never know what the future may hold. The Z-Bolt Galaxy Green Laser is comparable in price, but is only rated down to 41 degrees. The same model rated to lower temperatures is $50 more expensive. That laser uses more specialized “CR123A Lithium Batteries,” but the one I ordered just uses AAA batteries. That should make battery replacement easier and hopefully less expensive too. 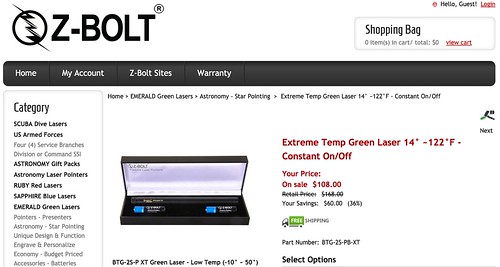 Our 6th grade daughter, Rachel, is really loving astronomy, and we’ve gone out to look at the stars several nights in the past couple years. Last night when we were driving back to Oklahoma City from Dallas we stopped at a rest stop, around 9 pm, in the Arbuckle Mountains, and both she and Sarah (who just looked at the stars out her window) were really dazzled by how many stars they could see. It was a clear night and not too cold, probably in the mid 50’s. It was a great night for stargazing and identifying constellations, but unfortunately I don’t have a good laser pointer that will work for astronomy. Last summer when Shelly and I attended the “Mobile Learning Experience” in Tucson, Arizona, an awesome guy with Arizona Star Tours used a powerful green laser to show us planets and constellations before we looked through his fantastic, $12,000 portable telescope. I’ve wanted to have my own green astronomy laser ever since.

On the subject of backyard astronomy, I’ll also share a shout-out for the “Night Sky” app for iPhone. I’ve LOVED using it the past year to identify planets at night. Sometimes this is early in the morning before school or work, sometimes it’s at night… but ALWAYS it’s information and knowledge that I wouldn’t likely have otherwise! While Mars and Venus are relatively easy for me to identify now, it’s much harder (or even impossible) for me to distinguish between Saturn and Jupiter without help. “Night Sky” is awesome for this.

Venus, Saturn, Mars, and Jupiter are spectacular this morning! Venus looks like it is on fire! #oklaed cc @sfryer pic.twitter.com/UBat3KaeRU

Venus is spectacular this morning, also Mars above in the SE sky. Sirius in the SW is flashing brightly #oklaed pic.twitter.com/6hnQ0Al3h9

I’ll report back in a few weeks/months about how well the Z-Bolt laser pointer we ordered works for us! For more info on backyard astronomy and hobbyist lasers, check out “Sam’s Laser FAQ.”