This evening I finished watching yesterday’s Apple Special Event video, in which Apple employees announced various product updates and refreshes. One of the updates I’m most interested in is the update to AppleTV. Among other things, it allows apps to be organized into folders, the same way users can organize apps on iOS devices like the iPhone and iPad. I recorded a six minute video showing how I’ve organized my AppleTV apps, and showing off a few of my favorites.

The apps I demonstrated included:

One app I meant to demonstrate but forgot is Littlstar, which is an amazing Virtual Reality (VR) app which includes interactive 360 panoramas within video documentaries. One I watched this evening is “Inside Syria VR,” a video included in ABC News’ VR website. I shared the VR movie “Clouds over Sidra” with our service learning students at school this semester, and they really found the perspective it gives to the Syrian refugee crisis to be powerful and moving. 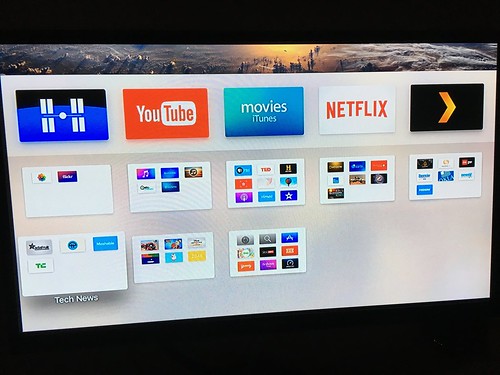