Scratch Day in Oklahoma City on Saturday, May 14, 2016 A Transformed Political Culture in Oklahoma #transformOK #OklaEd

We are facing drastic budget cuts for public education in the state of Oklahoma this year. These cuts are not caused exclusively by declining global prices for oil and gas. Tax cuts and tax credits sustained and increased by our legislators have and continue to play a major role in this crisis. When the price of oil was over $100 per barrel, Oklahoma was maintaining almost last place status in state-level education funding comparisons like K-12 teacher salaries and per-pupil financial allocations in K-12 schools. (Around 48th in our nation of 50 states in both cases.) The best article I’ve read to date summarizing our present economic morass was Alana Semuels (@AlanaSemuels) March 10, 2016 article in The Atlantic, “The Folly of State-Level Tax Cuts.” It sounded appealing to many when Ronald Reagan promoted it, and it has to many Oklahomans in recent years, but tax cuts to the wealthy and massive tax credits to corporations don’t lead to “trickle down” financial benefits for taxpayers or public school students. We’re living through the combined results of this misguided state tax policy, along with an ongoing state legislative culture which simply doesn’t value public education. It’s tragic, it’s heart wrenching, it’s depressing, and it’s frustrating.

#oklaed #edsandite Okla budget is structurally weak from tax credits and tax reductions for those in high income brackets. We must do better

My wife, Shelly, (@sfryer) and I attended a presentation last Wednesday night (May 4, 2016) at Classen School of Advanced Studies in Oklahoma City Public Schools (@okcps) to learn about the impact of budget cuts on our students and school. This year we have a 12th grader, 10th grader, and 6th grader all attending ClassenSAS as International Baccalaureate majors (Alex & Rachel) and a drama major (Sarah).

One Oklahoma student speaks up for 700,000 others: "Budget, teacher cuts ‘robbing my generation’." #OklaEd #OKLeg
https://t.co/BcGLbgJvsN'

Oklahoma City Public Schools announced earlier this semester that 209 teacher positions would be cut for 2016-17 to meet budget shortfalls. At that time, those cuts were to provide $8 million of $30 million of needed budget cuts for OKCPS. Statewide for next year, a $1.3 billion budget shortfall is predicted.

These numbers are big and sound scary, but it get even worse when the specific impact of these cuts on YOUR OWN public school are detailed. 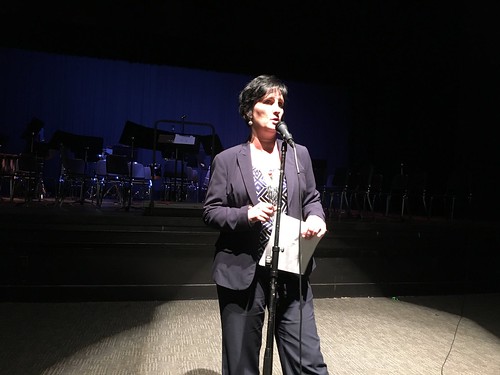 Here are some of the ways we learned budget cuts and decisions by OKCPS administrators are affecting students and families at ClassenSAS for 2016-17:

Keep in mind the items listed above were mentioned in last Wednesday’s meeting for parents, and I took notes during the presentation on my phone. I did not record the session, and I certainly could have misunderstood some things. If there are errors in this list, please let me know by leaving a comment or contacting me via Twitter (@wfryer).

This situation obviously calls for action. I’m not suffering under any delusions that this budget crisis and the underlying perceptions of public education which have significantly shaped it will change anytime soon. We have moral obligations, however, to do what we can. I’m planning to:

Please consider what steps and actions you will take to address our educational funding crisis in Oklahoma. We live, thankfully, in a relatively open and free society. It’s time to exercise our Constitutional rights of free expression and freedom of assembly. Sitting Bull said it well:

As individual fingers we can easily be broken, but together we make a mighty fist.

It’s time to speak up and take action, #OklaEd.

“Sitting Bull Quotation on Collaboration” (CC BY 2.0) by  Wesley Fryer