Scratch is a wonderful, FREE, block-based coding language and website students around the world have used since 2007 to create over 16 million projects. “Scratch is used in more than 150 different countries and available in more than 40 languages.” Learners of all ages have created a diverse array of animations, games, interactive art projects, music and dance projects, stories, and video sensing projects. Scratch is one of the most powerful and important digital resources students and teachers around the world should know about and know how to use. 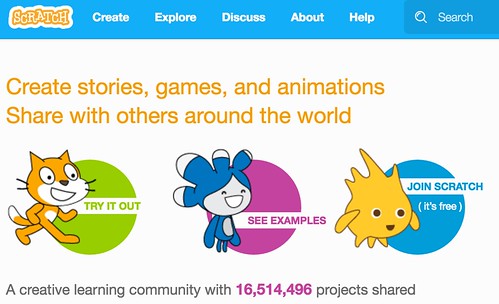 “Scratch Software: Over 16 million projects” (CC BY 2.0) by Wesley Fryer

Scratch software is now web-based but requires Adobe Flash, so unfortunately it doesn’t run on Chromebooks. Pyonkee is a free iPad version of Scratch, but it not maintained (as Scratch is) by The MIT Lifelong Kindergarten Group. The Scratch Jr app was released for iPad and Android in July 2014, and a PBS Kids version of Scratch Jr was released in December 2015. Scratch Jr is designed for younger students and offers the basic functionality of Scratch, but does not include the community sharing features of “regular Scratch.”

This Saturday, September 17, 2016, my wife Shelly (@sfryer) is going to lead a 1 day PBS Scratch Jr. Coding Camp for 2nd, 3rd and 4th graders in Edmond, Oklahoma. The event is sponsored by The Div, which is a local 501c3 nonprofit focused on bringing coding experiences to area youth. Shelly has been collecting as well as creating tutorial videos for creating different kinds of projects in PBS Scratch Jr. I’ve also created a couple to help her. Last night I created a 4.5 minute tutorial, “Create a Simple Race Game Animation in Scratch Jr.”

This evening I created a 12 minute video, “Create a Maze Game in PBS Scratch Jr.” This latter project is MUCH more complicated than the starter projects Shelly is going to introduce to Saturday’s young workshop participants, but might offer a challenge to more advanced students who are ready for more complex coding tasks.

I used this 9.5 minute, silent video tutorial as a guide to create my narrated tutorial. Eight different characters (or “sprites”) are required to make this project. I uploaded those eight screenshots to this Flickr album, and also added them (as clickable thumbnails) below the tutorial video on the Oklahoma Scratch Camp resource page for the September 2016 PBS Scratch Jr. Coding Camp.

If you teach younger elementary students and have access to iPads or Android tablets, please consider introducing your students to PBS Scratch Jr! Since many students are already familiar with the characters of different PBS Kids shows, like “Nature Cat.” Encourage your students to use these characters and let their creativity shine! 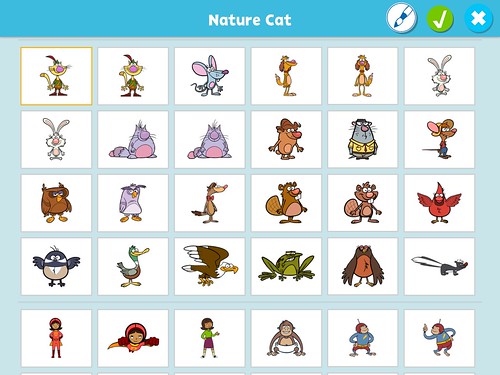 More activities, lesson resources, and curriculum for Scratch Jr. are available on www.scratchjr.org. Shelly is continuing to build a YouTube playlist of PBS Scratch Jr. and Scratch Jr. video tutorials. Sam Patue (@sampatue) is the author of “Programming in the Primary Grades: Beyond the Hour of Code” and a great educator to follow for more ideas about using coding with elementary students.

If you’re interested in bringing Shelly and I to your school, conference, or other organization/event for a coding workshop with PBS Scratch Jr., please get in touch! All the resources for Shelly’s Saturday PBS Scratch Jr. workshop are freely available on the Oklahoma Scratch Camp Google Site.