Two of the most important digital literacy skills we need to develop and practice today are the ability to effectively filter information and the ability to create algorithms (code) which cause digital pixels to do our bidding. In this post, I’ll describe the steps I followed to create an “information filter bot” over the Christmas holidays and challenge you to both create something similar AND share a blog post (or at least a tweet) telling others about it. If you’d like to first check out the final result of what I built using Twitter, Google News, Pocket, and  IFTTT.com, follow the Twitter channel @UBInews and then create a new channel in your Flipboard account by following it and making that Twitter stream into one of your personal Flipboard channels. I’ve created a 2 minute video demo showing the final product if you’d like to watch that as well.

Before I share the free web accounts you’ll need to setup to create a similar information filter bot and the steps I followed, please keep in mind that steps, while they may be filled with geeky jargon, are really not that technical to follow. You do NOT need specific coding skills to make something similar.

The past year I’ve enjoyed co-hosting an almost weekly technology web show and podcast called “The EdTech Situation Room” (@edtechSR) with my Montana friend, Jason Neiffer (@techsavvyteach). As a result of our conversations about the educational angles on current technology news, I’ve been doing a LOT more reading about artificial intelligence (AI) and futurist predictions about how both AI and automation are affecting and will affect our workforce. In the course of reading many articles and listening to lots of podcasts, I ran across the term “Universal Basic Income” (UBI) and the book “Raising the Floor: How a Universal Basic Income Can Renew Our Economy and Rebuild the American Dream” by Andy Stern (@andystern_dc). I haven’t finished reading Andy’s book yet, but I’ve read enough from him and other authors to be convinced UBI is a topic we all need to discuss and face politically in the months ahead.

The metaphor I have in mind for this kind of information flow manipulation comes the end of J.K. Rowling’s 6th Harry Potter book (“Harry Potter and the Half-Blood Prince“) when Dumbledore is in the sea cave with Harry. To save them both from attacking creatures, Dumbledore masterfully creates, swirls and directs streams of fire around the island on the cave’s lake. This is how I think about manipulating, channeling, filtering and directing information flows in the ways I’m describing in this post. What I’m doing is far less amazing to watch, I’m sure, but it’s still really cool and I enjoy this metaphor. 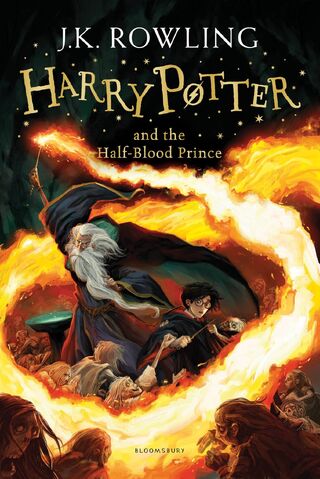 Of the four websites I used to create my information filter bot, all require that you create a login account. If you “try this at home,” you may want to create a separate email account or use the Gmail “add + and a word” trick to an existing Gmail address so you can register a new account on some or all of these sites. Here are the required accounts:

I created a Google Document partially recording my workflow and experiences when I initially created @UBInews. I also needed a place to provide attribution for the Creative Commons shared icon and the header photo I used on the Twitter account.

This is the basic workflow for the information filter bot I created:

Here are the steps I followed to set this up.

There are several reasons I chose to create and use a Twitter channel:

Remember to keep the name of your Twitter channel as short as possible, to make it simple for people to use and recognize. If possible I also think it’s best to avoid special characters like hyphens or underscores. Use a relevant and attractive icon for your Twitter avatar, and provide proper attribution. Use Creative Commons licensed images like those included in thenounproject.com, and CC-licensed photos like those on photosforclass.com.

#UBI Security Guard Robots Could Cut Crime in Half https://t.co/HmMPcYMvsb

Since IFTTT does not yet have an applet which will post directly into a Flipboard magazine, I needed a way to collect links. List.ly is one of my favorite tools for creating linked lists of things, but I chose to use Pocket (@pocket) since it’s specifically focused on article sharing. I used the Gmail “add + and a word” trick to register a new Pocket account. I also linked the account on sharedli.st/ubinews, since your default list of articles in Pocket can’t be publicly shared with others directly. That’s why sharedli.st is helpful. I included that link in the Twitter profile for @UBInews.

If This Then That (IFTTT.com) is an incredibly powerful and useful website which empowers users to define “triggers” for events and then resulting actions which should be taken using a variety of other websites. Recently IFTTT renamed these algorithms created by users. Instead of “recipes” they are now called “applets.” These are the five applets I created with IFTTT: 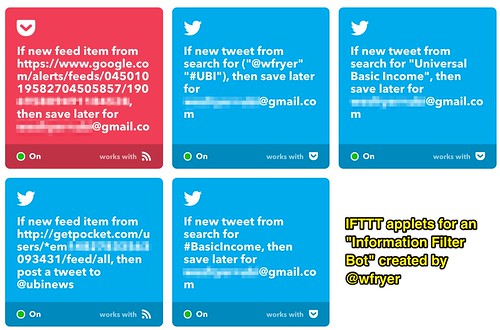 “IFTTT applets for an ”Information Filter” (CC BY 2.0) by Wesley Fryer

In order, here’s what these IFTTT applets do. Each of these have a “trigger” and an “action.”

It took a bit of iterative testing to figure out what combination of Google News feed sources and Twitter sources would generate a good stream of links about UBI. Originally I included any article in a Tweet shared with the hashtag #UBI, but it turns out not everyone using the #UBI hashtag on twitter is referencing Universal Basic Income. This process of experimenting with different “Feed inputs” into your information filter bot is VERY important! You don’t want to create a feed of unrelated articles and tweets, and that’s easy to do. While I still have a few duplicate articles shared on @UBInews from time to time, it’s generally pretty good. If you take on this challenge to create your own information filter bot, you might end up spending the most time on this phase, experimenting with different feed sources. Don’t shortchange yourself in this process, since the quality of the article, tweet and blog post links you generate will be directly related to the quality job you do setting up the IFTTT applets.

One of the reasons I initially wanted to just have articles auto-post to Flipboard is that Flipboard’s algorithm seems to auto-eliminate duplicate posts and links. That is NOT the case for Pocket, but I did find an extremely useful Python code created by Matt Oswalt (@mierdin) which can delete duplicate articles in a Pocket account.

I have wasted several hours tonight trying to get this Python script to run on my hosting server https://t.co/Tu90R09tnn #VeryFrustrated`

@Mierdin hi Matt – I'm trying to use your Python script with @pocket https://t.co/Tu90R09tnn but not having much luck…

Unfortunately, I have very little experience with Python at this point, and was unsuccessful in trying to get this script modified to run automatically on my hosting server. After returning to school next week, I’m hoping to share this blog post and Python scripting need with our high school STEM club sponsor, to see if perhaps he and his students could help me figure it out either running locally on my laptop or (preferably) running on my web hosting account.

That summarizes the background and process I followed to create the @UBInews information filter bot. I’m really pleased with how it’s doing at this point, and actually included it in my own @wfryer Twitter profile to help others find it. I not only want to share these ideas and steps for creating an information filter bot so I can learn more as others try different related techniques, but also to encourage people to learn more about “Universal Basic Income” as a concept and political proposal.

Please reach out to me via a comment or a Twitter reply (@wfryer) and let me know if you find this article helpful, and especially if you learn something new while creating your own information filter bot. Good luck and have fun!