In the summer of 2019, I purchased a $100 propane smoker before our summer family camping trip to Colorado, and after multiple iterations, figured out how to smoke some pretty amazing brisket with it. After considerable research and debate with myself, 9 months ago I become the enthusiastic owner and backyard barbecue chef user of a RecTeq RT-700 wood pellet grill. This was one of the ways we chose to use some of our stimulus money from Uncle Sam!

Since becoming a lover of backyard barbecue and all kinds of smoked meats, I’ve created “Cook with Wes” social media channels, including a Facebook page, Instagram channel, and Twitter channel. I’ve also setup a food and recipe blog, as a space to share family recipes which my wife’s mother loved to cook, as well as my favorites, many of which are inherited from my mom. It’s also now a space where I document some of the things I do in different cooks, both in my indoor as well as outdoor kitchens. I’ve shared many of my favorite recipes with our son, who now lives in Houston, using the iOS Paprika app, but I can’t dynamically update his Paprika recipes from afar… So a recipe sharing website seemed like a good idea, not only for him, but also for our daughters who (eventually) may want access some of these family food favorites. I also post photos from my cooks periodically into a Flickr album. 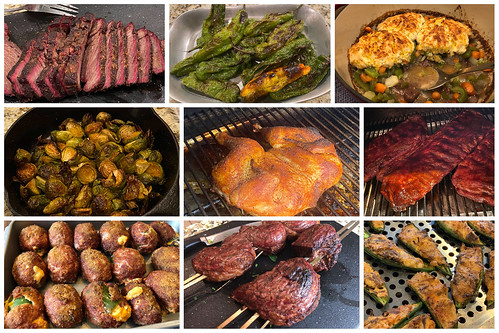 A couple months ago I setup a “Cook with Wes” YouTube channel, but I’ve decided to basically abandon it and keep posting my cooking videos into my main “wfryer” YouTube channel which I’ve had since 2006 and have slowly built up to almost 2000 subscribers with enough view hours in past months to qualify for monetization. It’s not generating a ton of money at this point, but usually is enough for YouTube to send me a direct deposit of $100 to $150 per month. This is a nice side benefit to my cooking and media creation hobby, and basically covers my ongoing web hosting costs, which is very nice!

“Putting yourself out there” with videos on YouTube can be a perilous prospect in some ways, because folks can (at times) be harsh with their comments and feedback. Overall, my experiences with YouTube comments and feedback have been VERY positive, however. Most recently these comments helped ME learn some things I don’t know how I would have learned otherwise. Here are two examples.

This past weekend, I edited and published a video I’d shot about a week ago when I used a new grill cleaning solution and procedure to wash up my VERY dirty grill grates.

In the video, I show how I remove “the deflector shield” in the smoker when I’m cleaning it. At some point in the past few months, I started putting the deflector shield back into the smoker SIDEWAYS. It still works, but that’s not the way it’s designed to be used, so I’m guessing that has had a negative impact on the performance of my grill.

Since I recorded and shared this video, unknowingly including this “mistake,” I learned that I need to turn the metal deflector shield around ninety degrees! Viewers of my video pointed this out both in the comments on YouTube, and also in a private “RecTeq RT700 Insiders” Facebook group I’m in, where I shared the video. While it’s mildly embarrassing to make a mistake like this in a video I’ve shared publicly, it’s WONDERFUL to learn about something SO BASICI have been doing wrong and can now fix!

Another example of positive feedback is on my most popular barbecue video to date, “Overnight Brisket on RecTeq RT-700 Smoker with the Aaron Franklin moistness method.” I made several amateur mistakes in this video, including not cutting my brisket against the grain, and also not using an actual “slicing knife” to cut the brisket.

After realizing I really SHOULD have a slicing knife, I invested in a well-rated $46 knife on Amazon, and now (hopefully) look a little bit more like I know what I’m doing when I cut my meats at the end of a cooking video!

My point is this: We can all get better with feedback, and sharing your ideas, skills and hobbies on YouTube via video can be extremely beneficial for personal learning! You DO need to be ready to have some “thick skin” when it comes to YouTube comments… and I count myself fortunate in this regard. But I’m not sure my experiences with positive comments are that rare or unusual. I’m sure this is, to a large degree, related to the video content / topic and the interested audience. I’m thankful to be learning important things as I share my own journey of learning and discovery with cooking and backyard barbecue!

If you’re interested in cooking and/or backyard barbecue, I invite you to join me on my @CookWithWes social media channels! Links to those channels, and other places I share media and ideas these days, are all listed on wesfryer.com/after/. All my cooking videos are collected and shared in a YouTube playlist, which also has the shortened link wfryer.me/cook.