Whether or not you are a follower of Jesus and publicly profess “Christianity” as your faith, it’s important to pay attention what many “Conservative Christians” have been saying and continue to say about Vladimir Putin and his cultural / political agenda. I want to recommend two recent articles and OpEds on these topics.

First, check out Thomas Zimmer’s OpEd from Friday in The Guardian, “America’s culture war is spilling into actual war-war.”

Zimmer (@tzimmer_history) is an author and visiting professor at Georgetown. He’s the co-host of a German podcast, “Kreuz und Flagge” (@KreuzundFlagge) which focuses on Christian Nationalism. His podcast co-host is Annika Brockschmidt (@ardenthistorian).

In the OpEd, Zimmer accurately identifies the alarming international rise of right wing authoritarianism and appeal of these voices to “conservative Christians.” He notes:

“The transnational rightwing admiration for autocrats like Putin and Orbán is a crucial reminder that the struggle over democracy and multiracial pluralism is indeed playing out not just in the US, and that the reactionary counter-mobilization is an international phenomenon.”

Last summer, motivated in part to better understand the rise of “Christian Nationalism” in the United States generally as well as specifically in my (at the time) Christian church men’s group, I read an excellent biography of the Roman Emperor, Constantine. I shared some related reflections in my post-reading blog post, “Lessons about Constantine & Ancient Rome.”

The second article I want to commend is from March 5, 2022, in Foreign Affairs, “Russia’s Menacing Mix of Religion and Nuclear Weapons – In the Kremlin, Faith and Force Go Hand in Hand.”

Thankfully both of these article links can be accessed directly without bypassing a paywall.

The author of the Foreign Affairs piece, Dmitry Adamsky, notes:

Since the Soviet Union’s collapse, the role of the Russian Orthodox Church in Russian identity, domestic politics, and national security has grown immensely. Putin has introduced religious conservatism into Russia’s national ideology and used religious analogies to discuss security issues. He has framed this war in historical, almost transcendental terms. And Russia’s state-church nexus is most visible in the military—especially within the nuclear weapons complex.

It’s vitally important that we continue to “de-couple” organized religion and politics in the United States. Those conservatives calling for a Christian theocracy in the United States with “One Nation Under God” apparently have not studied political and religious conflict in Europe, or may not be students of Christianity and Jesus Christ at all.

My interest in these issues as well as professional work and advocacy is part of the impetus behind the “Conspiracies and Culture Wars” media literacy project, which is a nascent book that will (hopefully) become one of several new publications I’ll share in the coming year(s).

These issues and the stakes of these conversations are very high. As citizens of the United States, as Christians, as followers of Jesus Christ, it is exceptionally important that we better understand the unfolding “culture war” all around us, and we thoughtfully speak out against both heresy and cultural fratricide.

Please join me in praying that moderate, well-informed, moral leaders and voices will prevail in our polarized climate of conflict and emotionally charged media. May God protect us all. 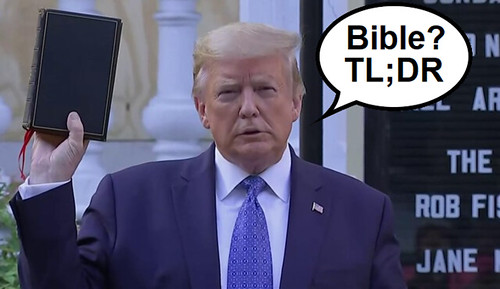 “Trump’s Photo-Op of Faith” (CC BY 2.0) by Mike Licht, NotionsCapital.com