According to a Qualcomm infographic published by ArsTechnica in May 2014, in the United States “the average home has 7 connected devices today, that’s predicted to exceed 20 devices by 2020.” If our family was included in that survey sample today, we would definitely inflate the mean.

This weekend our family took a 1600 mile road trip from Oklahoma City to Burlington, Vermont, for the 2014 “Create, Make and Learn Summer Institute” organized by Lucie deLaBruere. (@techsavvygirl)

Lucie has lined up a fantastic week of STEM & #MakerEd (Maker Education) learning with a variety of presenters. I can’t wait to learn more about Minecraft and MinecraftEDU from Kevin Jarrett (@kjarrett) on Wednesday and Friday! All the resources and handouts from the week’s workshops and sessions are available on the 2014 Schedule, which is a Google Site. Those include resources for my sessions on “Making Media.”

I like taking family photos with our “digital devices” from time to time. These serve as “sign of the times” images, showing how digital devices and media are becoming more normalized within our lives. My October 2008 photo, “The replacement for Saturday morning cartoons,” showed how our kids had gone 1 to 1 using laptops six years ago. The August 2013 photo, “2 to 1 at Home,” shows how they’ve moved from single devices to multiple devices (including mobile smartphones / iPod Touches) for their digital media use. In preparing for this week’s road trip, I realized we’d set a new family record for our number of wireless-capable devices that we’d be traveling with. A couple of days ago, I asked everyone to put their devices out on the floor before we set off in the morning so I could document how many wifi or bluetooth-powered devices we’re toting on this journey. I forgot to include my own iPad, and took the photo with my own iPhone, but I put my iPhone case in the photo as a placeholder. I used the free website ThingLink to create hyperlinked “hotspots” on the original image explaining what each device is. In total, we’re traveling with 18 wireless devices this month. Wow.

The other device which warrants a quick explanation is the TP-LINK TL-MR3020 Wireless Portable Router. Inspired by Alan Levine, I purchased this a couple years ago to to create my own DIY “PirateBox.” I haven’t yet managed to get it working properly, however. At some point when I do, my thought is to provide people at conferences and workshops I attend with open access to download free copies of my different eBooks from the Piratebox. At some point I’ll revisit the PirateBox DIY instructions and give them another try. The software installer has been updated to make the process easier, so perhaps I’ll be successful next time. For more background, see the May 2014 article, “PirateBox Delivers Brand New Anonymous Sharing Release.” I rarely use this as a presenter, but have (on occasion) used it to create an AirPlay-friendly wifi hotspot at a conference where AirPlay ports (Bonjour networking ports) are blocked on the official event wifi network. My Verizon mobile hotspot works sometimes with AirPlay, but even when I’m the only one connected it can be sluggish at times and inconsistently available. I have no idea why, but would love to know and fix it / tweak it if that’s possible.

I’m not sure I would have predicted even a couple years ago that our family would actually go on a road trip together with so many wireless devices. I wonder how many years it will be before someone in our family is wearing a device like Google Glass? Probably not many. 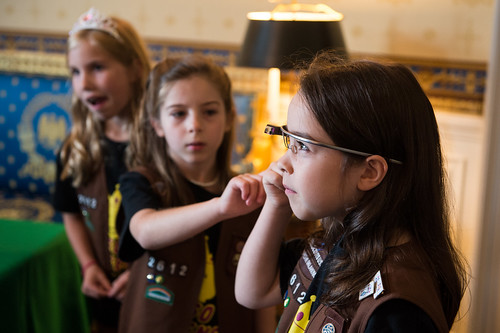