Last week and this week several members of our family have been and are visiting Philadelphia and Washington D.C. We were in Philly to attend part of the 2015 ISTE (International Society for Technology in Education) conference, and are visiting friends as well as sightseeing in D.C. for the 4th of July weekend. We’ve used Airbnb for several years on family vacation trips, and have had VERY good luck with the service and the lodging we’ve secured in different places. That hasn’t changed this summer: We still love Airbnb, and still highly recommend it to others. This weekend, however, we had some experiences that have broadened our perspective on the service. As we use Airbnb in the future, we’re likely to both check local “crime maps” as well as be sure the lodging we’re considering has locked rooms where we can secure our valuables. 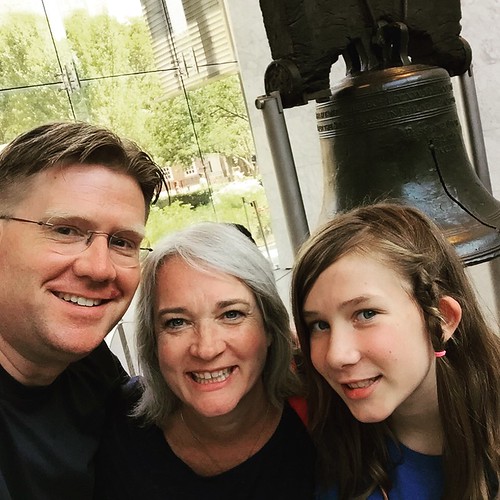 The prices of hotels for the ISTE conference in Philly were absolutely ridiculous. We didn’t realize we’d be attending the conference until a few months ago, when my wife won a national PBS award as a “digital innovator” in the classroom. At that point when we checked on hotels, the cheapest ones available were $300 or $400 per night. Since we wanted to stay a little longer than PBS was providing a hotel room for Shelly, I decided to book a room with Airbnb.

I ended up booking a room in a “row house” about ten minutes south of downtown, and the cost was just under $400 for four nights. The first day we arrived after we left our bags in our room, we did some walking around the neighborhood before eventually hailing a taxi and heading up to see the Liberty Bell. Many of the people we encountered were very friendly, and there were some good things going on around us. Several of the streets were blocked off by the city so children could play in them and ride their bikes / scooters without having to worry about traffic. A local group (or maybe the city) provided free lunches for the kids during the summer weekdays. The weather was absolutely delightful, cool and comfortable, and we saw more people sitting on their stoops or stairs in front of their houses or apartments, visiting and relaxing, than we normally do elsewhere. There was more of a “neighborhood feel” in that area than I’ve experienced in a long time, anywhere we’ve lived or visited. There is a lot to be said for neighbors being outside, talking with each other, and I wish we had more of that in our neighborhood back in Oklahoma.

In addition to these positive things we observed, we also realized right away that we were staying in an area which likely had higher rates of crime, and which could be dangerous to explore as newcomers… especially at night. The bars on the windows on all the corner convenience stories were the main hint of this. We were the only white folks walking around on the streets of the neighborhood, almost everyone else around us was African-American. There were a few Hispanics as well. Being a minority (racially) is not a foreign experience to either my wife or to me, and it is certainly not a bad thing… in fact we both deeply value racial diversity and have lived and worked in places where that’s been an important part of our lives. It felt, however, like we had stepped into another culture, and it reminded me of when I lived in Mexico for a year and traveled in Central America, as well as times we’ve traveled together in poorer areas of China. Poverty in different places has common denominators, and it’s always important to be even more situationally aware and wary than normal in situations like that.

Staying in this neighborhood in Philadelphia for four nights, as I did this past week / weekend, gave me pause to think about a lot of things regarding our communities and our schools. I loved how friendly the people we met were on the street, and the way neighbors were hanging out together and visiting. It was sad and thought provoking, however, to see all the bars on windows and the lack of grocery stores, restaurants, and other commercial amenities which typify many poor, urban neighborhoods in our country.

Here’s the main reason I’m writing this post: Next time I book lodging on Airbnb, I’m going to check local crime maps to see what kind of neighborhood we’d be staying in. I’m glad we stayed where we did with Airbnb in Philly, but I’m also thankful we didn’t have any problems. We certainly could have… but crimes can and do happen almost anywhere, not just in “poor neighborhoods.” If we return to Philly, I’m not likely to stay in this area again… not because we had problems, but because we certainly could have. I actually had to forcefully argue with my cab driver one night when I was getting a ride back to the house, because he didn’t want to drive into the neighborhood. I was thankful that at least our conversation was in English, and I wasn’t having to use my Spanish language skills… or worse, communicate in a language I don’t speak, like Chinese.

Here is the map of crimes documented by the Philadelphia police in the last six months around the location of our Airbnb row house, created online with www.phillypolice.com/crime-maps-stats. As you can see, there have been 61 thefts, 21 burglaries, 16 aggregated assaults, 11 robberies, 1 rape, and 1 homicide in the last six months in this area. Those are very different crime statistics than those of our neighborhood back in Oklahoma City, but I’m sure we have neighborhoods very close to us that are similar.

I used a similar GIS (geographic information systems) powered website to create a crime map near our Airbnb in Washington D.C. – crimemap.dc.gov. This map shows there have been crimes in the last 6 months in the vicinity of where we’ll be staying, but far less than the area where we stayed in Philly. 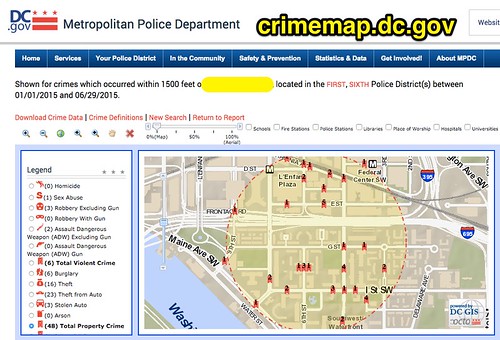 The other thing we’re going to do from now on, before making a reservation with Airbnb, is make sure the room we’re considering renting has a LOCKING door. Our rental in Philly did not, and while this didn’t prove to a be a problem, it certainly could have since there were other people renting another room right beside us. I know in Europe and elsewhere people stay in hostels where things are more communal, but typically I think it’s “normal” to have a way to lock up your valuables. I was really surprised we couldn’t lock our room door at this Airbnb, and am going to note that in my review. It’s something I hadn’t considered previously but will definitely remember in the future.

We didn’t use Uber when we were in Philly, as several other attendees I know did, we just stuck with “regular” taxi service. We put ourselves potentially more “at risk” to be victims of theft or other crimes by the location where we stayed with Airbnb, however, and I don’t want to repeat that oversight.

Hopefully by sharing our recent experiences with Airbnb, you can avoid similar situations. Check out the neighborhood in advance with a police-provided, browser-based crime map, and verify a locked room is available before booking! We’re going to do these things from now on. 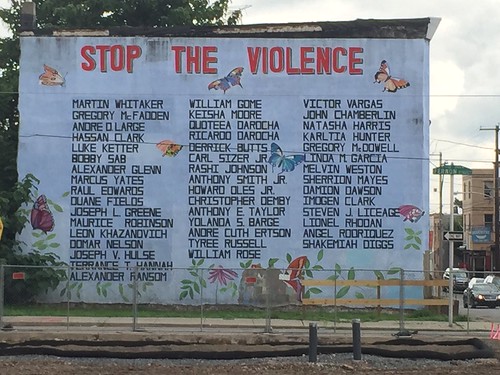