Our youngest daughter, Rachel, has become a pretty amazing Minecraft guru in the past year.  I initially taught her to play, but the HOURS she has invested in playing, watching Minecraft YouTuber videos, and creating her own videos have catapulted her far beyond my own meager Minecraft skills into the digital stratosphere. She’s recorded some “collabs” (collaborations) with other Minecraft YouTubers she’s connected to via her YouTube channel, but those have been on Minecraft servers hosted by others. This morning (a Saturday) when I was out running errands, she recorded a 7.5 minute video, asking for help to get a Minecraft server running on her own computer. (She since deleted it from her YouTube channel.) 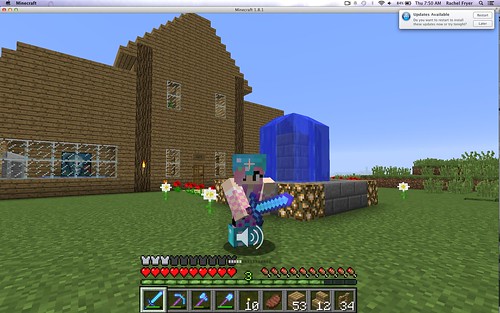 This was extremely impressive, as she had to work with the Mac OS X Terminal and do some fairly advanced things with commands and text files. Knowing a bit about networking, I was pretty sure (among other things) we’d need to setup port forwarding on our home router to get this to work, so people on the Internet outside our home would be able to connect to the Minecraft server she was trying to setup. This is the 12 minute video she initially used to figure out most of the steps for setting up the Minecraft Server on a Mac.

This afternoon I helped Rachel get her server working. It turned out she just needed THREE more steps to get everything working.

First, she needed to change the security permissions on her Mac laptop (in System Preferences – Security & Privacy) to allow programs from ALL sources (not just the Apple Mac Store) to open.

Second, she needed the full file path for the Minecraft Server java file in the START text file she created following the instructions in the above video. To get the full path, I showed her how to open a new Terminal window, and drag the Minecraft Server java file (.jar file) into the window. That expanded into the full file path, which she could then copy and paste into the START text file. Then when she double clicked that START file, it actually launched and started a local Minecraft server.

Third and finally, we needed to configure port forwarding on our home, Apple AirPort router. This page explained how to do it, although the screenshots are a bit dated from the current version of AirPort Utility. There is a just a single port which needs to be setup for forwarding, for the Minecraft Server to use: 25565. 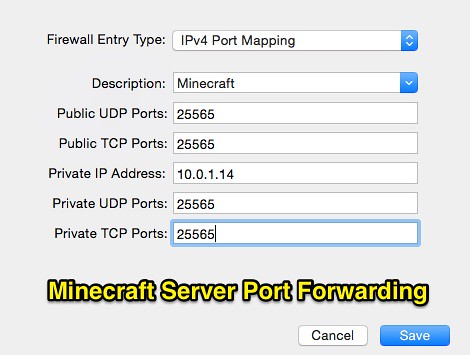 After making these changes, Rachel was able to share our home IP address with a friend and they were able to connect and play on her server!

Since her MacBook laptop is so old, however, the Minecraft server instance they were using started to lag and eventually crashed. She was not only running the Minecraft server in Java, but also Screenflow software (to record) and Skype, to talk with her friend. They ended up stopping their collab on Rachel’s server, and going to another server (Mineplex) hosted elsewhere. That way they could still record the collab session. I’ll link and embed it here after she publishes it.

A couple notes about Internet safety: I had Rachel use my Skype account to connect with her YouTuber friend for their collab, rather than setup and give her permission to use Skype independently. Beforehand, Rachel showed me some of the videos her friend had created, so I was able to hear her voice and verify she’s a young lady. I’ve also been in the adjoining room during their actual collab session, where I can hear their conversations.

The speed with which Rachel has learned and wants to move forward with her digital video publishing and collaborating has pushed my own comfort levels. There is a LOT to be aware of and careful in this landscape. My wife and I both monitor what Rachel shares on Twitter (and have had some conversations about that) as well as her YouTube channel and the comments she receives. There have been some negative comments, but overall (as she nears 300 subscribers) things have been VERY positive and motivational for her. Of course, this could change very quickly, so it’s something we’re continuing to have frequent conversations about these issues and “check in” about them.

Here is a rough Twitter-powered timeline of Rachel’s experiences with Minecraft, which I’ve relocated via my Tweet Nest Twitter archive. For more background about Rachel’s summer experiences in Connected Camps’ “Club Minecraft,” check out this podcast from September 2015. There are a TON of positives about the skills and knowledge Rachel is gaining via her work and play in Minecraft, but also a lot for us to navigate together in terms of Internet safety and digital citizenship. Hopefully Rachel & I can find ways to share some of her digital learning with Minecraft and YouTube together down the road, as we did with Scratch Software in 2012 at the Discovery Education Network (DEN) Summer Institute in Bozeman, Montana.

Rachel (5th grade) is so excited, she is taking 2 laptops to school to demo the #Minecraft social studies project she did with a partner!

I just showed my student Edgar's Minecraft build video to @sfryer & Rachel – they were blown away too! http://t.co/gCGbD4HNAX

[VIDEO] My Minecraft World by Rachel Fryer (age 11) http://t.co/yhgNl37nQF made with @BookCreatorApp at #iCampKSU http://t.co/cnUbBBiRlp

I just registered Rachel for online Minecraft camp! Use my referral link to get a 25% discount! http://t.co/fYcBZ0nxBA via @connectedcamps

I added a video to a @YouTube playlist https://t.co/Yy6sjqRlnz Minecraft PC – the Land of Spooknavia: Happy Halloween!

Do you know kids interested in recording Minecraft screencasts? Show them this tutorial video by @RachfMC #oklaed https://t.co/qmABbiqogA

Minecraft PC – the Land of Scandinavia: Best Episode Ever! {22}: https://t.co/tfETCr0nDj via @YouTube

This post was originally titled “Minecraft Server Port Forwarding for Collaboration on a Mac,” since that is something others might Google for who run into a similar roadblock that Rachel and I encountered today. Since that title probably seems rather obtuse to most teachers and parents, however, I renamed it “Our Daughter Plays Minecraft with International YouTubers.” The friend she played Minecraft with today lives in Canada.