For the past year or so, my wife Shelly (@sfryer) and I have been talking a lot about helping organize and facilitate a “Digital Sharing Conference” (@digishare) in Oklahoma City. The Google Doc I shared this past August includes more background. Two of the influences on our thinking about this new event include Miami Device (@miamidevice) and The Mobile Learning Experience (@mobile2015). Sometimes “early adapter / innovator” teachers are primarily drawn to these kinds of conferences. It’s my desire that the Digital Sharing Conference, scheduled for November 4-5, 2016 in Oklahoma City, focuses on assisting “early majority” teachers to create digital channels for their classrooms to share and amplify student work.

I’ve been thinking about how some restaurants use placemats to communicate with patrons and raise awareness about new food possibilities.

As a huge fan of maps and geography, I also like the idea of making this paper-based placemat into a map. Eventually I’m thinking about creating or asking others to help me create a sketchnote / visual note style drawing of this. 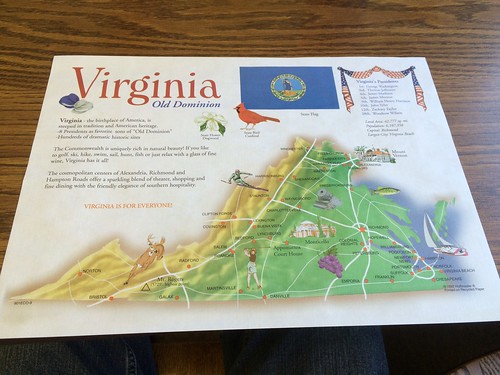 This is the basis for the “Digital Sharing Map: Classroom Edition.” Here’s the paper sketch version Shelly and I created this afternoon, on our drive back from Allen, Texas, where we were visiting family. While the Digital Sharing Conference will primarily focus on DIGITAL content creation, it can be powerful to use paper-based / analog learning objects in conjunction with digital ones. Think “paper slide videos.” (Hat tip to @pocketlodge!)

After tweeting this to Ben Wilkoff (@bhwilkoff), who I’m hoping will play a major role in our first Digital Sharing Conference by serving as one of our keynote speakers, Ben challenged me to create a short video to share more background about the map and sketch.

On a late lunch stop in Ardmore, Oklahoma, Shelly and I recorded a five minute video giving more background about “The Digital Sharing Map” and how we’re thinking this can serve as a framework for the Digital Sharing Conference.