Distressed Over the Rising Costs of College (and other things)

If you are not distressed over the rising costs of college in the United States, you are not paying attention. When I worked at the College of Education at Texas Tech University from 2001 to 2006, my first and WONDERFUL boss (Fred Hartmeister) used to compare the skyrocketing costs of a graduate course during the time he’d been at Tech. As I recall, it was something like $200 per course  in the mid-1990s to (then) $800. This was the cost for a single graduate class. You don’t have to be an economist, a quantitative researcher, or a math major to understand this is RIDICULOUS inflation. When you’re a student (or a paying parent) you FEEL tuition and student fee increases like this deeply. I was very blessed by the generosity of the American taxpayer in establishing and maintaining military academies, providing educational benefits for veterans, as well as my own family, to not pay much at all for my undergraduate or graduate education. In graduate school particularly, however, I was very aware of these costs because I saw the bills.

One semester when I was working on my doctorate, tuition was increased something like 30%. This was crazy. But no one was protesting in the streets. Street protest isn’t something that’s “done” in West Texas, I guess, but it certainly would have been warranted. I guess everyone just figured “the kids will get more financial aid” and we’ll keep enjoying collegiate football and basketball… which seems to be the primary focus of many community members whose children or grandchildren are not currently enrolled as university students. The degree to which athletics have become the focus and almost the “Raison d’être” of colleges is shocking, depressing, and apparently inevitable at least in Division I schools. This opinion is not coming from someone who abstains from enjoying college sports – I love going to college football games with our family, and occasionally other sports. Sometimes educational reform conference speakers will opine about Rip Van Winkle and how comfortable he’d be to wake up in a K-12 school today. That’s not a fair allegory for educational change in MANY K-12 classrooms today (like mine, for instance) but it could never apply to collegiate sports and sports culture on many university campuses. Collegiate as well as professional sports have “been around” for decades in our country, but the financial side to sports in 2014 is radically different from what it was 20 or 30 years ago.

For the past several years, my wife and I have been encouraging our children to start visiting colleges and universities to get a better idea of where they might want to go after high school, what they might want to study, and how different universities compare. Our kids are very smart, and by world standards our family is very wealthy… but by college financial standards, we’re “middle class” and won’t be paying full price for any Ivy League schools with cash. Our kids also won’t be qualifying for Pell Grants or Oklahoma’s Promise.

I’m convinced kids start forming perceptions VERY early about where they want to go to college. I’ve been conducting informal interviews with people about their own college experiences, as well as with parents about their own children’s decisions to go to university, for several years now. Some of my most interesting conversations about this have been on airplanes. A few years ago, I talked with a dad whose two sons had both played Division I football, one at Michigan and another at UTEP as I recall. One of our drivers in Chicago last week (when I was presenting about “Creating Multimedia eBooks” for EdTechTeacher) told us about his experiences going from a huge south-side high school to the University of Alabama, and then to Arizona. I’m fascinated not only by stories of recruitment and collegiate sports experiences (which unfortunately often include injuries) but also by the process of “visioning identity.” I knew early in elementary school that I wanted to go to the US Air Force Academy. As a 4th grader, largely because of Labor Day family traditions gathering for KSU football, my youngest daughter confidently proclaimed she wanted to go to Kansas State University for college. I’m convinced the EXPERIENCE of spending time on a college campus can be pivotal in shaping our imaginations and the ways we “program ourselves” to formulate our identity about who we are, where we want to go, and who we want to become. We live in a culture devoid of many rituals and tribal markers which defined people in earlier times. Collegiate colors, attendance at football games, and college fight songs have become our “rites of passage” and cultural identity markers. I see these things happening, I study how they “happened” to me along with others, and am intrigued by the role both our experiences and our choices play in these processes. 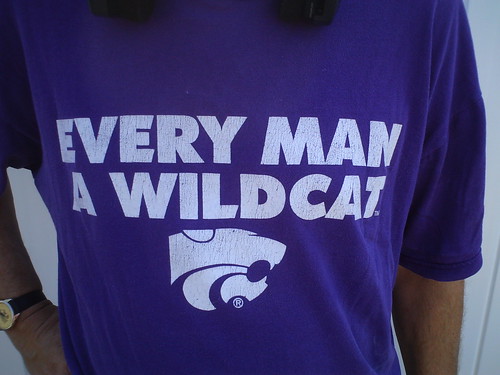 The cost of a college education now figures prominently in all of this. I want my own children to be able to go to any university they want to attend, but I have no idea how this will practically work from a financial standpoint. We’re not a big sports family, we’re much more into community theater, jazz band, Scouts, technology and church activities. Our kids ARE smart, and I’m sure they’ll qualify for some scholarships, but there’s no way to predict at this point how we’re going to get our three children through college as a middle class family.

Thanks to the recommendation of Michael Wesch, this summer enroute back from Vermont our entire family visited the College of Wooster in Ohio. (I should write a separate post about all the reasons why Wooster is amazing. My son was particularly impressed and I think he’s going to apply there in a year.) We also visited Webster University in Saint Louis the next day before getting back to Oklahoma. Last week we visited Columbia College in Chicago with just Sarah. Together and separately, we’ve toured or had other on-campus experiences at Kansas State, MIT, Harvard, Northwestern, The University of Oklahoma and Oklahoma State University in the past four years. This fall we’ll visit my undergraduate alma-mater, the Air Force Academy, because two of our kids don’t have any memory of going there when they were very little.

We’re going to keep visiting colleges, because I know usually “the apple doesn’t fall far from the tree” and I don’t want my own children limited by the experiences, opinions, and perspectives of our family. There are more CHOICES today open to them than I can comprehend. No, they can’t “do anything” or “go anywhere.” There are physical and financial limits. But many of the historical “limits of discovery” to college and to paths in life SHOULD be less than they were for my wife and I. Most kids don’t start dreaming about going to a particular college just from pulling up its website on the Internet. Real experiences, when you visit and DO things on a college campus, as well as when you can visit with people who have graduated from there or work there now, are what become the fodder for dreams and the subconscious mind which shapes young identies night after night. “Putting on the colors” and name of a school plays a big role too. That’s why I’m buying a college shirt for any university we visit together as a family. When you “put on the colors,” you’re declaring yourself to be “part of the tribe.” That’s a powerful thing. Often parents “do this” for and to their children at early ages. This isn’t a malicious thing. It is, however, a powerful thing. In doing this, we rhetorically ask our kids, “Will you follow in our footsteps?” “Will you join our tribe?” For those who don’t, the penalty can be harsh, even though it’s sometimes talked about in joking terms. Hearing the banter in Roanoke, Alabama, this week between Auburn and #RollTide Alabama fans was case in point. I hear this from Oklahoma and Oklahoma State fans at our elementary school every week we’re in session. Tribal identities run deep. 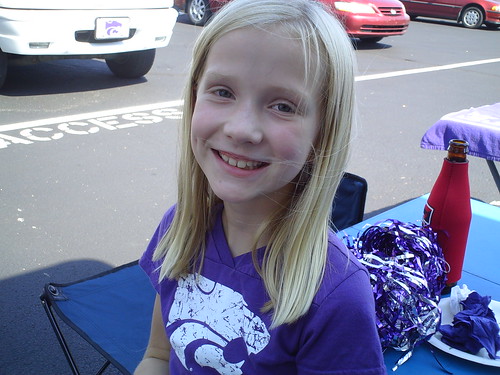 As was the case with my post last night, “Free Play and Our Overscheduled Lives,” I have more questions than answers. But I also have some links. This summer’s college visits with our kids have been a bit of a needed wake-up call for me to accelerate my own book writing projects, as well as a larger “Dave Ramsey style” DVD and workbook professional development series idea I’ve been considering for my “Mapping Media” digital literacy framework for the past year. Dad had better get SERIOUS about generating extra income for these smart kids running around our house who have been visiting all these amazing colleges. (It would have been good to have the same clarity of savings needs about 20 years ago, but…)

This past spring I heard the NPR report, “Tough Lessons On Debt For College Students.” If you missed it, give it a listen or read the transcript. Getting our kids through college debt-free is potentially a very real goal for our family. “Yes, we want you to graduate from college. But we also don’t want you to graduate and be saddled with a crippling debt load.” Some of the stories I’ve heard of continuing college debt from other teachers at my elementary school last year were absolutely heartbreaking. No one should be crippled with debts like this.

Add to that NPR article of assigned reading from me two more articles. I’ll warn you that these are related to the topic of college costs, but more disturbing for different reasons. They also bring up a host of “other issues” which are probably not often discussed in “polite company,” but should be. The articles are:

These articles and issues go beyond the span of school / educational technology / leadership issues and topics I blog about here most frequently. The March 2014 presentation I shared at a friends’ church in Oklahoma City, “Managing Digital Footprints – For Grandparents” is the most recent I’ve shared which crosses over family, school, church, ethics, social media, and economic lines. I don’t have my thoughts fully collected after reading these last two articles today to write a cogent response or reflection other than this: We live in a VERY different day not only with respect to college costs and the information landscape, but also in regard to the spotlight the choices of our children and we ourselves make. When we say “there are a world of choices for you” I think many people (myself included) still have a small conception of what that means. In some cases ignorance a good thing. In others, it’s unfortunate.

While there is much to be enthused about in our “brave new world” of digital connections and possibilities, there is also a lot about which we should justifiably be distressed.