The United States is not only engaged in a new “Tech Cold War” against China and Russia, we are also under information influence attack from foreign as well as domestic adversaries who are aggressively working to build “followers” on Facebook and other social media platforms they can use to exert unconstitutional influence on our political processes, as well as malicious influence on our national culture. Among other things, these groups are working to make our political culture and daily conversations MORE POLARIZED and hyper-partisan. In this post, I’d like to briefly uncover and unpack a specific example of this type of unwanted, malicious information peddling as well as some specific strategies we can employ to combat it. I use the word “combat” deliberately, because like it or not, as citizens of the United States connected to social media platforms, we all are “combatants” in this fight. Many people remain unaware of this, however, so goals of this post are to raise both awareness and motivation to do something constructive about the reality of today’s information war.

This morning when I was on Facebook, Mark Zuckerberg’s multi-billion dollar newsfeed algorithm socially engineered for engagement and the amplification of “outlier content” (that’s another way of just saying, “the Facebook app on my iPad“) presented me with an article about a female U.S. Army soldier who was awarded the Silver Star. Being a military veteran and student of both military history and leadership examples, this is a topic of interest to me. As a media literacy and digital literacy teacher at our school, however, I’m also aware of how news articles are being “weaponized” today by different groups working in the shadows in coordinated efforts / attacks designed to influence our conversations and culture in the United States in malicious ways. Former U.S. state department official Richard Stengel’s September 2019 article in Time magazine provides a good overview of this. 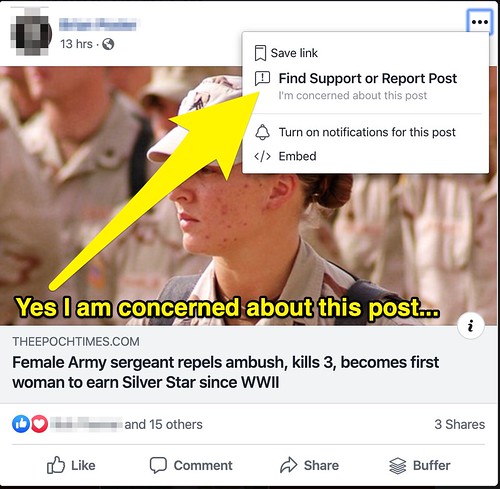 "Concerned about Foreign Influence Peddli" (CC BY 2.0) by Wesley Fryer

Here are the media literacy strategies I employed to “fact check” this article this morning, learn more about the organization sharing the article, and reach out to my PLN (professional learning network) on Twitter to get their feedback and suggestions on how to best “read” and understand this shared article, and also decide whether or not I should CLICK LIKE or CLICK SHARE on Facebook. Based on the results of my brief research findings, I decided NOT to like, share or amplify this article and post on Facebook. This blog post is my elaborated response.

Here are the strategies:

Strategy 1: Read Laterally by Googling for Other Articles on the Same Topic

To start researching the veracity./accuracy as well as potential motivation/bias of this article and its author(s), I first Googled the name and title of the soldier mentioned in this 9 December 2019 Epoch Times article / post, “Sergeant Leigh Ann Hester.” Some authors (like @holden) identify this strategy as “reading laterally for other articles on the same topic.”

These results quickly revealed the person and alleged event from this article (a meritorious recognition of bravery in combat) WAS real, genuine and factual. The events described are not “current events” for 2019, however, they took place in 2011 and the Silver Star was awarded in 2015. The MilitaryTimes.com article referenced in the Epoch Times post is from June 2019. From a factual standpoint, therefore, this post is NOT “disinformation.” The events DO NOT appear to have been fabricated. But it is still worth investigating further, given our current climate of weaponized news content. 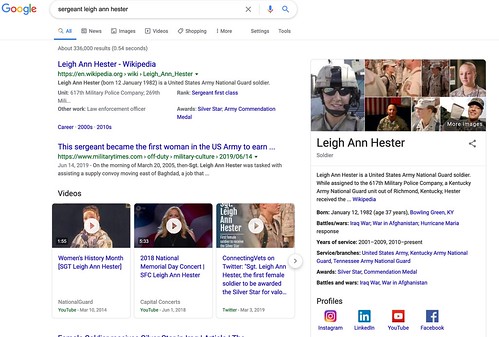 "Google Search for ”Sergeant Leigh Ann He" (CC BY 2.0) by Wesley Fryer

In the past, media literacy teachers encouraged students to FIRST click on the “About Page” of a website to learn more about it. While that is not a terrible strategy, in today’s polarized media landscape where we have foreign entities / actors and even governments hosting websites which purport to be domestic U.S. special interest groups, “About” pages on websites have less value in many cases than other alternatives.

I first visited the root domain address of the original news article / post (theepochtimes.com) to get an overview of the site’s article topics. On first blush, it appears very conservative and pro-right in its slant. Its byline is, “Truth and Tradition.”

The website Media Bias / Fact Check confirms this perception about the right of center bias of TheEpochTimes, but does not classify at as “Extreme.” What makes sites like this challenging is they are not completely filled with disinformation, most of the news articles contain factual elements. Media Bias / Fact Check gives the site a “mixed” rating for factual accuracy, explaining:

Overall, we rate The Epoch Times “Right Biased” based on editorial positions that consistently favor the right. We also rate them factually Mixed due to the publication of pseudoscience as well as propaganda against China and the promotion of pro-Trump propaganda. 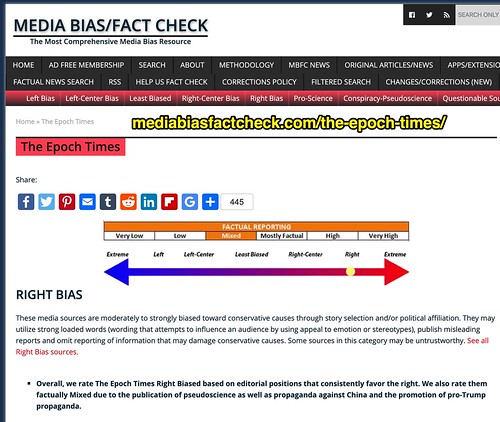 Renee Hobbs (@reneehobbs) points out that WikiPedia pages for organizations and websites can be helpful to get an overview of a group’s focus and potential bias. For instance, the English WikiPedia article for “The Epoch Times” reveals it’s associated with the Falun Gong spiritual movement in China, and in the 2016 U.S. Presidential election was “the second-largest funder of pro-Trump Facebook advertising after the Trump campaign.” That claim has 7 different footnote citations on the WikiPedia article. By even mentioning “Falun Gong” on my blog, I’m risking unwanted attention from Chinese national authorities, because that group is one of the most blocked and suppressed entities in the nation. In 2007 when I first traveled to and presented in mainland China, I had to make a ‘mirror’ site of all my workshop resources on PBWorks.com, because that entire domain was blocked by “the great firewall of China” since supporters of Falun Gong had used it to create a large informational website. Without the insight provided by WikiPedia contributors in this case, I would have no idea about these political connections for the owners of TheEpochTimes.com. I certainly would not know about these specific details if my research was limited to only “vertical reading” on the website’s About page. 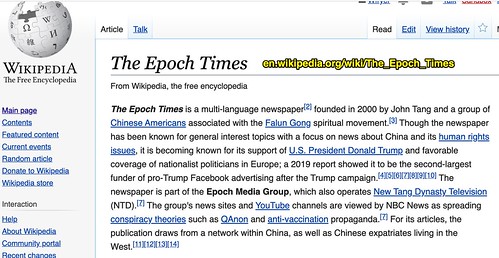 "WikiPedia page for The Epoch Times" (CC BY 2.0) by Wesley Fryer

The “talk pages” on WikiPedia also can be very instructive to learn about bias and perspective. Here’s the talk page for The Epoch Times on the English WikiPedia today. Notice the “warning signs” for potential bias? This is not a mainstream media source, although on their About page they purport to be nonpartisan and unbiased. 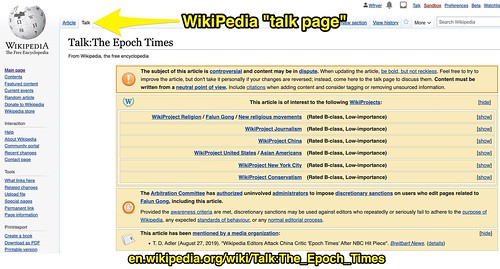 "WikiPedia Talk Page for The Epoch Times" (CC BY 2.0) by Wesley Fryer

This media literacy “deep dive” also points to the importance of adults, teachers, and students recognizing and sharing the VALUE OF WIKIPEDIA as an information resource. This is something my 5th and 6th graders explored this week in our lesson, “Good Role Model Reflection.” We talked about how we determine authority and validity on websites, and how the images of WikiPedia all have attribution details about where an image came from and how its reuse is conditionally authorized or freely open / public domain. These are not only great conversations about copyright, attribution and fair use, they are also fantastic about the ways our information landscape works today (“No Sally, WikiPedia is not a trash resource filled with lies and garbage”) and how we both CAN and SHOULD use WikiPedia as media literate citizens and learners.

For more on these topics, I recommend you check out these resources and conferences: