The last 3 days, Shelly and I have WONDERFUL learning and networking experiences attending the NASA 2022 Space Exploration Educators Conference (#SEEC2022) at Space Center Houston (@SpaceCenterHou). For the past two years, I’ve taught a media literacy unit to my 6th graders called, “Froot Loop Conspiracy Theories,” focusing on the Apollo Moon landings, YouTubers who debate the question of whether the moon landings were “hoaxed” (Pro v Con,) and the SIFT web literacy framework to evaluate sources. Yesterday after SEEC2022 ended, Shelly helped me record an eight minute video I titled, “Conspiracy Theories, Apollo Moon Landings and SIFT,” to summarize some of the key ideas from these lessons while “on-site” at the Johnson Space Center in front of the actual Apollo 17 command module. I recorded, edited and published this video using my iPhone. Unfortunately the videos of me talking are QUITE dark, but I think the content is good and hopefully the additional media I added during editing will make this useful. In this post, I’ll attempt to summarize some of the key media literacy concepts and ideas I highlighted in the video, as well as some of the technical things I did and learned by creating it.

Here are some of the important ideas from the “Froot Loop Conspiracy Theory Unit” which I included in this video: 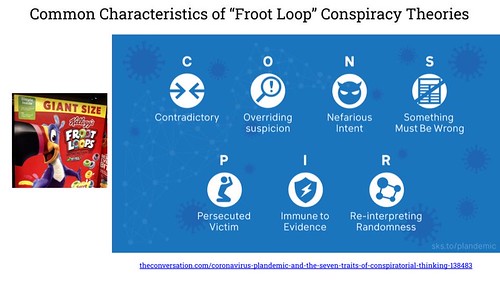 “Characteristics of “Froot Loop Conspir” (CC BY 2.0) by Wesley Fryer

7. In 1969, NASA had the technical and engineering expertise to land human beings on the moon, but did not have the technology / ability to fake it with movie special effects via Stanley Kubrick. This is the primary contention of filmmaker S.G. Collins, in his video, “Moon Hoax Not.”

8. Thousands of scientists, engineers, and other NASA employees / contractors were involved in the U.S space program and “moonshot.” It defies rationality / reason to imagine this many people would or could keep a secret as big as, “the moon landing was a hoax.”

9. The truth matters, journalism is important, “fake news” is a bad term to use, and we should maintain our idealism as well as faith in both the existence of trustworthy sources as well as our own abilities to SIFT for the truth in multiple contexts. (Reject nihilism!)

Here are a few technical things I learned when creating this video.

In older versions of iMovie for iOS, it was NOT possible to import a still image and use it as an “overlay” video, a “side-by-side” video, or “picture-in-picture” video. As a workaround, to use still images as media overlays I USED to: 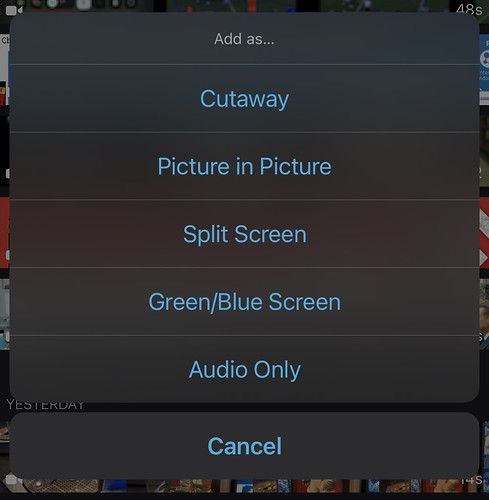 It’s great that iMovie for iOS now supports the direct importing of IMAGES as well as videos to use as media overlays. I used this feature multiple times in this edited video. However, sometimes I still like to use a “Ken Burns effect” video overlay. I did this, for example, with the cover image of Annie Jacobsen’s book, “Operation Paperclip.”

I used the iOS screen recording feature for several of the overlay images in the video, including:

One of the primary digital storytelling techniques which makes most videos, including documentary films, engaging for viewers is the use of “B-Roll footage.” I learned from fellow ADE Marco Torres in 2005 that “A-Roll video footage” is establishing shot video of a person who is speaking or the main focus of a film, while “B-Roll video footage” includes segments providing additional background / backstory about the topics being highlighted / discussed. I shot almost 5 minutes of B-roll footage in the “Starship Gallery” of Space Center Houston, and chose a “Creative Commons Attribution-Only” license for the video when I shared it on YouTube. This means others (perhaps in iPad Media Camps or Make Media Camps I teach, or elsewhere) who want to make videos about the early U.S. space program can freely use and “remix” this footage in their own videos. They can use the footage without getting my additional permission, since with a CC-BY license, “permission has already been granted” for re-use.

As I do for my YouTube cooking videos shared on my @CookWithWes social media channels, I used copyright friendly music for the “B-Roll video” from filmmusic.io. I already had about 8 different downloaded copyright-friendly songs in my iCloud Drive, along with attribution slides saved as images I could insert at the end to comply with the CC-BY license terms. This is another videography technique which is both important and helpful.

The video of me talking in this video is unfortunately pretty dark, and because of my own rushed sense of time I didn’t realize that until it was too late. Ff I could go back and record this again, I’d definitely try and bring a supplementary light to put more on my face. I actually thought after recording it that I would want to just delete the footage and re-record in front of a green screen when I got back home, using better lighting, but I do think the content in my narration is good.

What do you think? Do you have an opportunity to teach others about “Froot Loop Conspiracy Theories?” These are important conversations for us all to have. Conspiracy theories are, unfortunately, not going away, and the fractured as well as polluted nature of our information environment makes it certain we’ll hear a lot more of these in the months and years to come. I don’t view media literacy as a “silver bullet” to solve all of these problems, but I do regard media literacy skills as essential tools and strategies for ALL students and citizens in the twenty-first century.

This is the last week of our second trimester at school, and my sixth graders will be finishing and sharing their final video projects for this media literacy unit focusing on the Apollo Moon Landings. I’m eager to see what they will create, and hopeful the quality of their work will exceed past trimesters, thanks in part to enhancements I’ve added to the unit.

I’ll be sharing more about this media literacy unit in the weeks to come! Please let me know your thoughts not only on this weekend’s video but also on the project as a whole. I’d love more feedback and suggestions on how to make it even better! 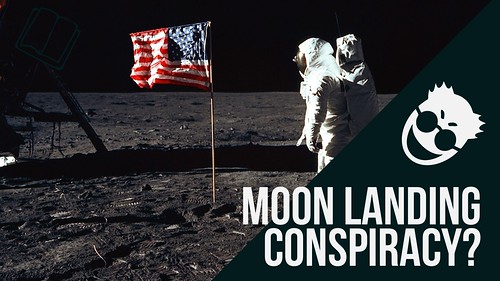 Postscript: Sometimes the YouTube algorithm is priceless! (Actually it is quite often for me…) This evening when re-watching my own video, YouTube recommended “Adam Ruins The Moon Landing” by Adam Conover (@adamconover). It’s much shorter AND clearer than the SG Collins video I’ve been using for 5 semesters. I’m going to use this in our next / third trimester when I teach this unit again!