The Netflix “Chef‘s Table” BBQ documentary on (now) Australian chef Lennox Hastie, culinary artist at Firedoor Restaurant in Sydney, is an amazing celebration of both cooking creativity and the magical art as well as science of cooking with fire. The episode on Lennox is number 2 in the series:

Learn more about him on his English Wikipedia page and official Firedoor Restaurant website.

This documentary episode is extraordinary for several reasons. First, like episode 1, it is a masterpiece of digital storytelling. The “B-roll footage” establishes context, provides depth of backstory, and is both visually arresting as well as engaging… Especially because of the constant presence of FIRE in various forms. It’s first class videography. I’m reflecting on how this could be used in some kind of weekend workshop I offer in the future on both digital storytelling and backyard BBQ…

Secondly, however, this is an extraordinary documentary because it is a tale of identity and self-discovery. Over time, Lennox discovers not only his own cooking style but also his own place in the world. He is told by others, repeatedly, “who he is and who he should be.” He has to push back on that, over and over again. He literally has to move multiple places to discover himself and self actualize, he lives for five years in the Basque region of Spain, and eventually he immigrates to the east coast of Australia. He’s originally from England.

I find some of my own life story in this compelling tale.

We know from cultural anthropologists that our identities are largely shaped by our surroundings: Other people and circumstances constantly seek to inform who we perceive ourselves to be. Yet we do not have to conform to those expectations. It can be difficult, and sometimes requires that we change our physical location and surroundings. We can do it, however, and Lennox’ story is inspiring in that respect as well.

I too, love cooking with fire!

Lennox Hastie is the author of “Finding Fire: Cooking at its most elemental,” which I have added to my reading wish list! 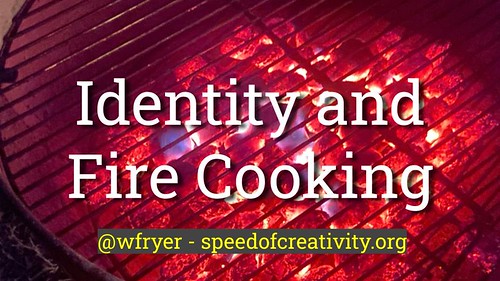 “Identity and Fire Cooking” (CC BY 2.0) by Wesley Fryer