Why You Want to GateKeep Your Teen’s iOS Apps EdCampOKSDE Coming Tuesday July 7, 2015 to Oklahoma City

Upgrade a Verizon Hotspot for $22 Without a New Contract

Mobile, cellular hotspots can be money pits, but they also can be lifesavers if you’re presenting about educational technology in a location with spotty connectivity or draconian Internet content filtering. After considerable research in the summer of 2012, I opted to start paying $50 per month for 5 GB of wireless data from Verizon. At the time our family members were still AT&T customers and had not yet made the jump (which I definitely recommend if you have local LTE connectivity) to T-Mobile. Since we drive up to Kansas several times per year to see my parents, and Verizon had (at that time) a huge cellular coverage advantage over AT&T in the state, this made sense. About the time that contract expired (about eight months ago) the mini-USB charging port of my Verizon hotspot stopped working. Instead of paying for an upgrade, however, since my travel schedule was light, I put my Verizon account on a “suspended” status which kept my contract but stopped my monthly bills. As summer approached, however, I knew I’d want to re-activate my account and obtain a new hotspot to use (if needed) during keynotes, presentations, and workshops. A week ago I purchased a “Verizon Ellipsis Jetpack 4G LTE Mobile WiFi Hotspot” for $22.49 from itembazaar on Amazon.com. Since we are Amazon Prime members, there were no shipping costs. Today I was able to get someone at a local cellular repair shop to cut the SIM card from my older Verizon hotspot to micro-SIM size. I was then able to start using it in the Ellipsis Jetpack without an upgrade charge or new contract from Verizon. Given the expense of other options, this is a big coup. My new Verizon hotspot is shown on the left in the photo below, and the older (and now useless) hotspot is on the right. In this post, I’ll briefly explain why this Amazon purchase turns out to be such a great deal and why I think this is working for me. 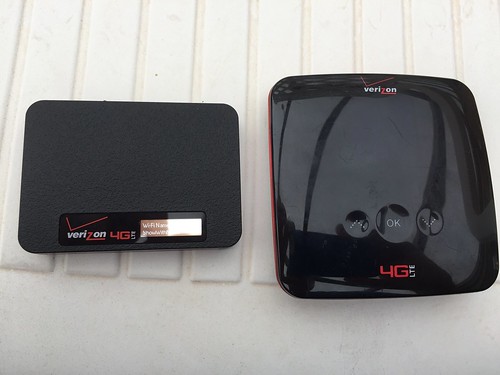 My contract with Verizon was automatically re-activated after being suspended for six months, and I was quite irritated to have to pay about $90 for two months of non-use last month. I had been exploring my options for getting a functioning 4G/LTE hotspot, and these were the choices I came up with:

The Ellipsis Jetpack hotspot I purchased for $22 via Amazon is apparently not intended (by Verizon) to be sold and used like this. Verizon sells it on its website for $199 without a contract, or for $1 with a 2 year contract. It is sold as a “no annual contract” device. Significantly, unlike my previous hotspot, it can’t connect via 3G. It’s 4G/LTE only. According to a Verizon employee I talked to, it’s also setup to require at least six months of use as a “no contract device” before it can be unlocked and added to a monthly plan as a mobile hotspot. 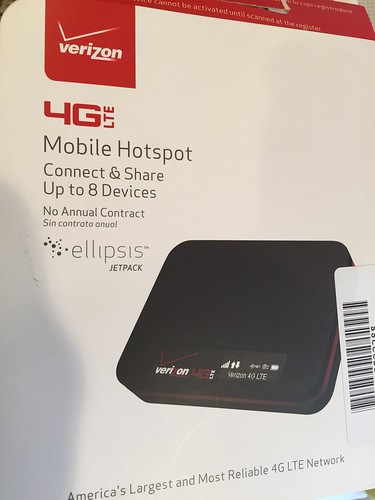 From what I’ve read and learned talking to different folks, it seems Verizon isn’t offering “hotspot only” contracts like mine any more. They want you to first be a phone customer, and then pay an additional monthly fee for the hotspot. If you “just” want a mobile hotspot from Verizon, apparently you can opt for a “no annual contract” option. The problem is, this provides LESS monthly bandwidth for MORE money. My grandfathered hotspot plan (which I’m retaining, even though I’m out of contract) includes 5 GB of data for $50 per month. The “no annual contract” rate is $60 for just 3 GB of monthly data. No one has ever claimed Moore’s Law applies to cellular data service, but it’s unfortunate some companies (like Verizon) are charging more per month for less data / provided services. I “get” that this is a pre-paid arrangement without a contract, but it still means less bandwidth for a higher cost. 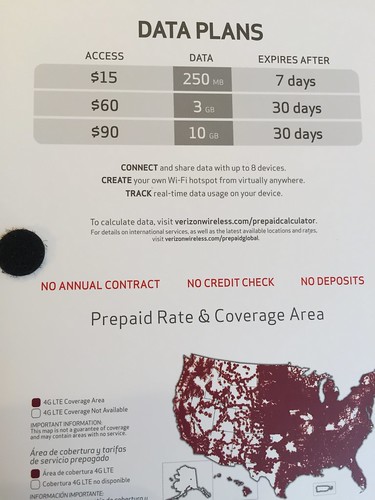 When I took my new Ellipse hotspot to a Verizon Store they were unable to activate it directly with the SIM card it had on my account, because it was a pre-paid / no contract unit. The representative was able to add it to my account as my device, however, and said it should work if I got my existing SIM card cut down to micro-SIM size. Sure enough, that turned out to be the case today. I was jubilant this actually worked!

If you find yourself in a similar situation with an expired Verizon hotspot contract but a service plan you want to keep using, you might be able to get the solution I’ve described in this post to work. I can’t find any new Ellipse hotspots for sale on Amazon tonight for anywhere close to $22, and I’m not really sure how the vendor that sold this to me was able to part with it at that cost. My initial tests today with the hotspot were all positive. Hopefully it will prove fully functional the next four weeks when I’ll be doing a lot of traveling and presenting.

My T-Mobile “unlimited” data plan on my iPhone includes 2.5 GB of tethering per month, but as I found out last December, when that quota is gone it’s not possible to pay T-Mobile for any more. I’m VERY happy to (again) have a functioning Verizon mobile hotspot, with the option to pay $10 per gig if I go over my 5 GB monthly quota. Hopefully I won’t, but it’s good to be prepared!

Have you had experiences with a mobile hotspot lately? Do my perceptions of how Verizon seems to be changing their plans and policies on “hotspot only” plans agree with what you’ve seen and heard?